By Vanessa on March 5, 2015 in Boomer and Senior News, History, Outdoors, Retirement, Science and Technology, Seniors

There are some places in the Eugene area where the geological history of the area is on display, such as the basalt columns at Skinner Butte. But for the most part, we don’t think about the fact that we drove over 40 million year old lava when we’re parking at Market of Choice to get our organic salad greens. I really enjoy exploring these hidden aspects of our environment. This was published in the August 2014 issue of Boomer and Senior News. 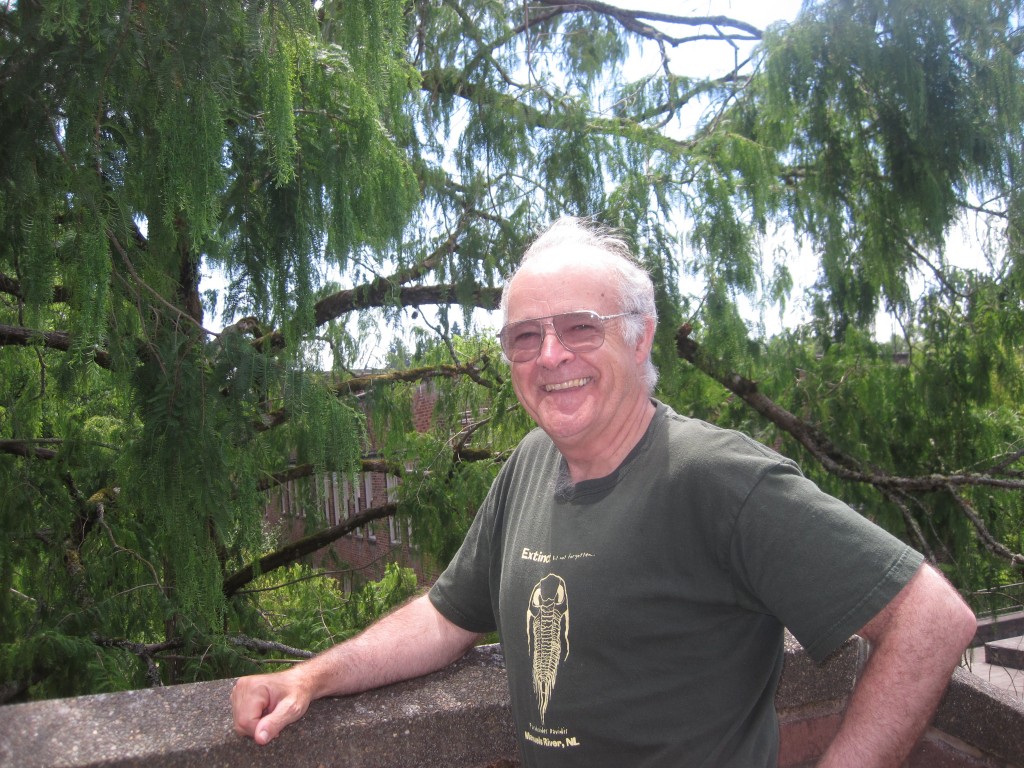 Just outside the building housing the office of University of Oregon geology professor Greg Retallack is a tree he calls “a living fossil.” Photo by Vanessa Salvia

Most fossils are hidden. They are buried under our homes and roads, embedded in the stony hills around us. Some fossils, however, are right out in the open, where we can walk past them every day. One of those is Metasequoia glyptostroboides, a tree known as the Dawn Redwood. One of these trees thrives at the University of Oregon campus, right outside the office of geology professor Greg Retallack. “This tree is a living fossil,” Retallack says.

Metasequoia glyptostroboides, Oregon’s state fossil, covered the landscape of earth’s temperate regions during the time of the dinosaurs known as the Late Cretaceous. The tree was known only through the fossil record and was believed to be extinct until 1944, when some living trees were found in a remote Chinese valley. Some seeds from these newly discovered trees were distributed to Oregon scientists shortly after.

The geology building on campus is named for Thomas Condon, who was appointed the first State Geologist for Oregon in 1872. He resigned that post to become the University of Oregon’s first geology professor. Condon founded the University of Oregon Museum of Natural and Cultural History, and his fossil collection is now the backbone of the museum’s exhibits.

Greg Retallack, an Australian who researches fossil soils of the planet’s oldest rock formations, is one of the directors of the Condon Fossil Collection at the museum. When he looks around, he doesn’t just see the tree-covered Coburg Hills, the pure water of the McKenzie River or the rock-climbing columns at Skinner Butte. He sees 40 million-year-old lava flows near Donald Street in Eugene. Thirty-million-year-old lava flows near the Mohawk area of Springfield. And those columns at Skinner Butte? Those are columns of basalt, which formed when magma intruded upon the sedimentary layers of rock known as the Eugene Formation. The horizontal cracks which are so convenient to rock climbers were caused by the rock contracting as it cooled.

“In Lane County we have a wonderful fossil record particular of the Eocene age in what is called the Eugene Formation,” says Retallack. “It’s a lovely assemblage of fossil seashells.” The hills in Eugene and northward to Salem are primarily marine rocks left over from a large bay, much like the San Francisco Bay, which once covered the area. These rocks hold mollusks, crabs, sharks and plants. According to an exhibit about the Eugene Formation at the University of Oregon Museum of Natural and Cultural History, the nearby Goshen Formation is the same age as the Eugene Formation, 35 million years old, but it contains land fossils because it emerged before the Eugene Formation.

“The lavas in our area were in the South Hills of Eugene and those are Eocene in age,” he says. “They go back about 40 million years or so. But we also see a very abrupt onset of volcanic activity around 30 million years ago and you can see those lavas that flowed down valleys from the beginning of the Western Cascades. You can see those younger flows especially on the front of the Coburg Hills and out around the Mohawk area in Springfield.”

The Willamette Valley is enclosed on the west by the Coast Range, on the east by the Cascade Mountains and to the north by the Columbia River. The valley and Coast Range are part of a wide continental shelf along the western margin of North America. This whole area is part of the Cascadia Subduction Zone, where the thinner oceanic Juan de Fuca plate is subducting beneath the thicker continental plate of British Columbia, Washington and Oregon.

There are still active volcanoes in the Cascades, notably, the South Sister, which caused a kerfuffle several years ago when satellites spotted a bulge on her side. It’s overdue for an eruption and that does cause Retallack to worry. “It’s quite likely to erupt at any time and it will have a fairly devastating effect,” he says. “Probably sending mudflows down the McKenzie River and perhaps overwhelming the dams.”

The fact that we’re living on a subduction zone puts us at risk for earthquakes, which may or may not be related to volcanic activity. “The problem with the subduction zone fault is that it is inactive for many hundreds of years, and when it goes, it goes with a magnitude 9 which is really big.” We live on an active tectonic margin and most of the time things are quiet, but when it goes, says Retallack, “it’s gonna be big time.”

The last time it happened was at 10 a.m. on January 26 in the year 1700. “ We know this because the tsunami from that big earthquake killed forests in Oregon that we could see by looking at tree rings,” says Retallack. “It also went right across the Pacific and was recorded at five separate stations on the north island of Japan at Honshu.” The Honshu records identified it as an “orphan tsunami” because it was not accompanied by any earthquake in Japan. In 1700, the Pacific coast was uncharted. The tsunami traveled across the Pacific Ocean for 10 hours and hit coastal Japan at midnight. Several separate Japanese sources describe coastal towns being inundated by 6- to 10-foot high waves. “They were mystified,” says Retallack. “They didn’t know where it came from.”

That’s not the only time that water has had a huge impact on the geologic record. A series of catastrophic floods swept from Montana across Idaho and Washington, and down the Columbia Gorge to Oregon. These were the product of a big glacial dam that melted at the end of the last ice age. “Great amounts of water were released into the Columbia and Snake river systems and it created distinct landforms in Washington and large lakes around the Dalles. But it also flooded most of the Willamette Valley.” Though the onslaught of water didn’t quite make it all the way to Eugene, there are many spots in the valley where the floodwater carried large boulders with it, which can still be seen. These rocks, known as glacial erratics, were carried down from glacial ice by these floods about 10 to 13 thousand years ago. More than 300 erratics are recorded throughout the Willamette Valley.

Marli Miller, a senior instructor in the University of Oregon geology department, has spent the past 5 years updating a landmark book, Roadside Geology of Oregon. “The old edition was written in 1977,” Miller says. “I was in high school when it came out.” Miller’s new edition, which will be available in fall of 2014, completely replaces the old one, with brand new color photos, color maps and new diagrams drawn by Miller.

Miller had been approached by the publisher about updating it, though originally said no because she was busy with other projects. “But then I took a look at it and decided that it really needed updating,” she says. “It’s full of new information. It’s been 35 years since that book first came out and there’s been a treasure trove of new material coming out about our geology.”

The new material is not just nice color photos. “Some things never change,” explains Miller, “like, ‘there was a basalt flow.’ But a lot of the interpretations have changed. I think it’s new all the way through.”

Miller says she went into the book project not realizing how interesting Oregon’s geology actually was. “When I really started diving into it,” she says, “it became a kind of a passion. I found myself finding all sorts of avenues of research. It was very cool.”

One of things that interests Miller is how much of our state’s history is grounded in volcanic activity. “Because it sat for such a long, long period next to a subduction zone, there’s been volcanic activity for its whole history,” she says. “Volcanic rocks do bizarre things. They flow over the ground and make these weird rocks, and there’s an infinite variety of features that you see that sometimes make it difficult to understand what is going on. Those bodies of frozen magma are exposed in some places, and they’ve generated a lot of gold mineralization, so it ties into our cultural history quite a bit as well.”

An upcoming exhibit at the University of Oregon Museum of Natural and Cultural History will coincide with the new edition of Roadside Geology of Oregon. Many panels of Miller’s geophotography will highlight different areas of Oregon along with details and maps.

This exhibit will complement the museum’s permanent exhibit, “Oregon – Where Past Is Present,” that delves into 200 million years of Oregon’s geology. According to one exhibit, “Oregon on the Edge,” every year, one to two inches of ocean floor slides under the continent and melts back into Earth’s mantle. Next time you’re at the coast, gazing at the sunset over the Coburg Hills or driving over Donald Street, you’re actually experiencing how Oregon’s past meets the present, and also moves us into the future. 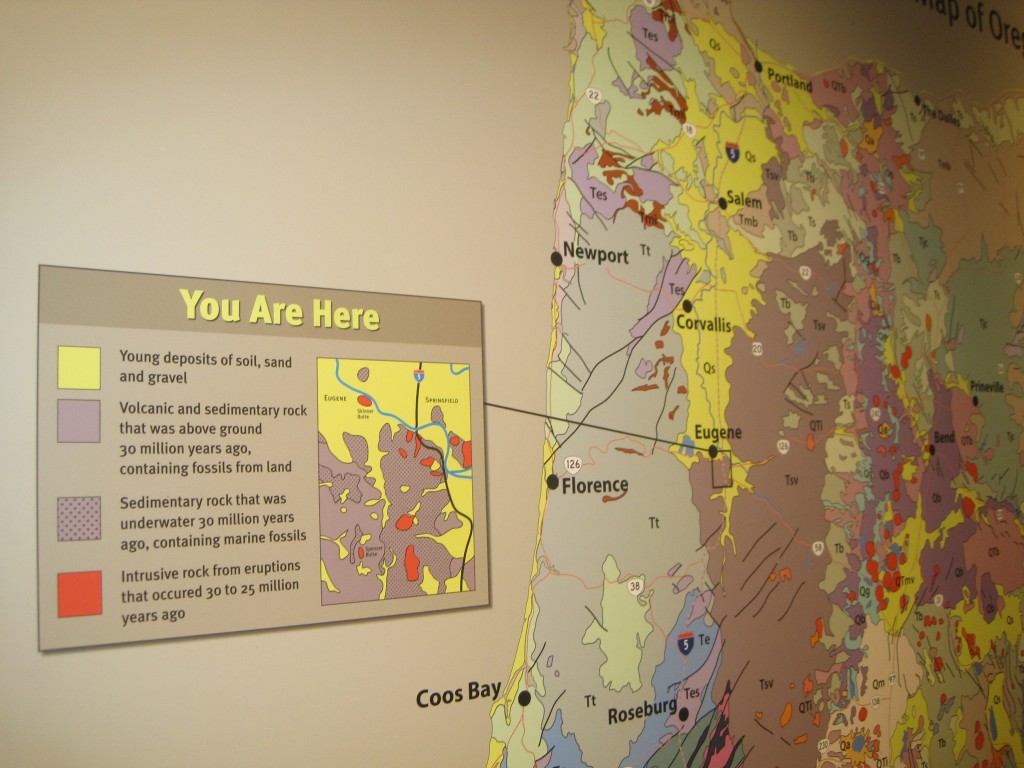 An exhibit at the University of Oregon Museum of Natural and Cultural History places Eugene in its larger geologic context. Photo by Vanessa Salvia