By Vanessa on March 28, 2014 in Business, Entrepreneurs, Food, Register-Guard

For the spring 2014 issue of Tastings for the Register-Guard. Pastys are a traditional Cornish pastry of meat and vegetables tucked into a flaky dough pocket. The owners of this business come from a large family with family members involved in many different local ventures, so I wrongly assumed that was the origin of the name Cousin Jack. I came to understand that the name actually derives from the British flag, which is known as a Union Jack. When miners started coming to the United States from other countries, they got the nickname Cousin Jacks because they were like “cousins” to the Cornish miners. As David says in the article, when you’re in a dark mine and covered with coal dust, everyone’s a Cousin Jack because they all look the same. I think the plural should properly be “pastys” because “pasties” are what strippers where over their upper bits, but the paper was happy with “pasties” so we went with that. 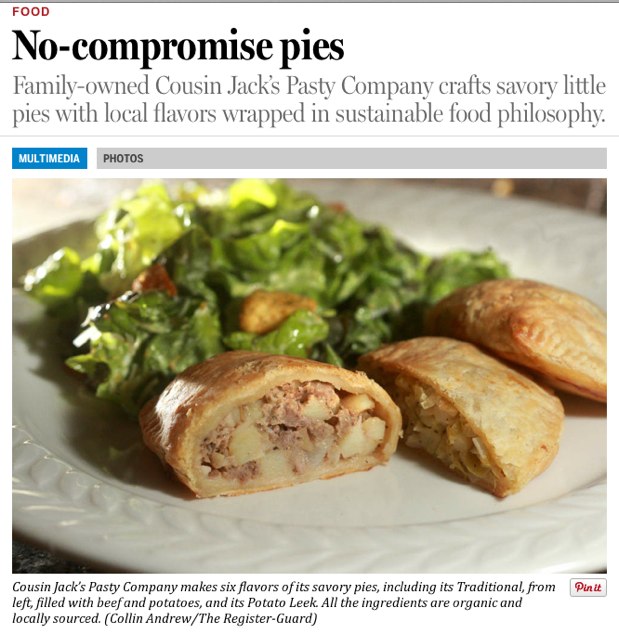 David Clark, 39, didn’t anticipate that when he became a business owner he would have to spend time washing wheels. But in fact, USDA inspection of the production facility that makes Cousin Jack’s Pasties is so rigorous that the wheels of all equipment carts that go outside have to be sterilized. After whipping off his hair net and stashing the wheels to dry, Clark heads upstairs to the office, where his wife, Kim Gibson, is handling a phone call while keeping an eye on their 5-year-old daughter, Zoe. After helping Zoe get a piece of cheese to snack on, Clark prepares to head to another small-but-growing Eugene business, Vanilla Jill’s, to discuss distribution pitfalls.

“We wear many hats,” Clark says. Gibson was pregnant when the couple began producing Cousin Jack’s pasties in June 2009. Before that, she was plant manager at her family’s Lochmead Dairy for nine years. Some of her experience from managing Lochmead transferred to her new role as business owner, but some didn’t. “It’s one thing to start a business and another thing to run one that has been successful for 60 years,” Gibson says. “Everybody has to be involved and you have to figure out where kids fit into it.” Gibson is the daughter of third-generation Lochmead Dairy owners Jock and Liz Gibson. “They weren’t running off to pick kids up at daycare,” interjects Clark.

While the day-to-day management of business and family life may be difficult, the couple’s commitment to local and sustainable food is easy. They source their ingredients locally wherever possible, including organic vegetables, fruits, nuts and mushrooms; grass-fed pasture-raised meats; organic butter; Tillamook white cheddar and locally grown organic wheat flour. Orange juice from Lochmead Dairy makes the pasty crust extra flaky. “We want certified humane meats and non-GMO foods,” says Gibson. “That was not something we were going to compromise on.” All of these delicious ingredients go into their hand-held meat and vegetable pies that are perfect for a gourmet dinner or lunch on the go.

The pasty (pronounced as in ‘fast’) is eaten in some form in most cultures around the world. At its simplest, it is a filling wrapped up in a crust. Meat-filled pasties were the food of choice for tin and copper miners in Cornwall, part of England. The “Union Jack” is the national flag of the United Kingdom, and when miners began to migrate to America, they were called “Cousin Jacks,” regardless of what country they were from. “When it’s dark in the mine and you’re covered with coal dust, everyone’s a Cousin Jack,” Clark explains. Clark’s mother was married to a Welshman, and Clark spent some time there as a youth. “Pasties are everywhere,” says Clark, in soccer stadiums, train stations and chains of pasty shops. In Cornwall, he says, in an area about the size of Lane County, there are 60 to 70 processors that mass-produce pasties.

“Lochmead has 50 employees and lots of moving parts,” says Gibson. Cousin Jack’s, on the other hand, has only two production workers. Yet the small facility in a historic cannery makes six flavors of pasties for sale in local freezer cases, restaurants and food carts. They’ve also developed a Swedish Meat Pie for the hot case at Dari Mart, which has been “very popular,” says Clark. The Dari Mart pie is less expensive, because it is not made with the same percentage of organic ingredients, yet still utilizes grass-fed beef. “It’s showing Dari Mart that you can provide a healthy food for a reasonable price and people will buy it,” Clark says. Gibson says that their meat pie is a hit with people needing a working lunch. “They try the meat pie once and they come back for it,” she says.

When you want to savor the pasty a little bit more, Gibson suggests pairing the pesto lamb flavor with a local pinot noir, such as one made by Lumos. “You could also pair the pesto leek flavor with a local white wine, especially something more minerally like Capitello.” She says that the wild mushroom flavor is a great choice to have along with a crisp, cold apple cider. The steak and ale flavor gets its punch from Ninkasi Otis Oatmeal Stout. “That would be a natural pairing,” says Clark. “But, there’s so much great beer here!” he says, so the best pairing is to just eat a flavor you like with a beer you like.

Considering that almost all of the ingredients for Cousin Jack’s pasties come from within 100 miles of their Eugene facility, wash your pasty down with a local beverage. “For me personally,” says Clark, “it’s just such a joy to be a part of this group of people that are working so hard to take care of the land here. They’re good stewards and I know that the circle of money staying here in our economy makes me feel good.”