By Vanessa on October 9, 2014 in Home, Register-Guard, Salvage and Design

For the Register-Guard Home and Garden section, October 2014. 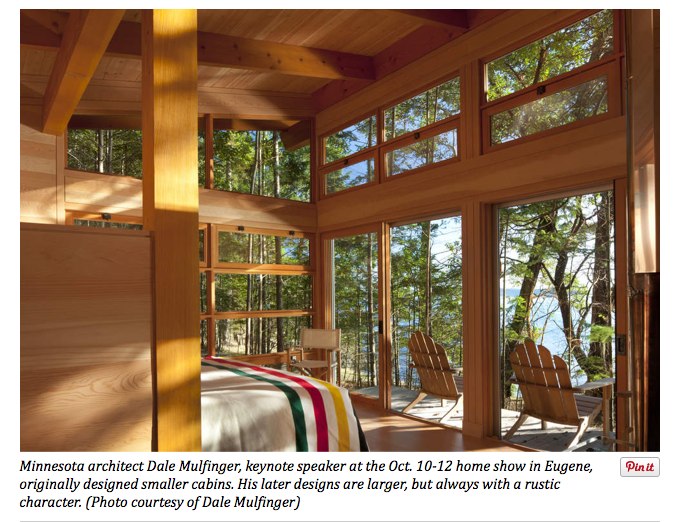 A Cabin State of Mind

Dale Mufinger’s nickname, “The Cabinologist,” doesn’t have anything to do with the Beach Boys’ song “Cabinessence,” but it does relate to music. He’s written 72 articles about cabins for a hometown publication, Minneapolis-St. Paul Magazine, and it was during a radio interview with a DJ named Joe that the name “The Cabinologist” was bestowed upon him. “I feel that I was anointed with this title and I’ve used it ever since, so I credit Joe with my Ph.D. in Cabinology,” jokes Mulfinger.

Even without DJ Joe’s help, Mulfinger would have long ago earned his advanced degree in Cabinology. In addition to the numerous articles about cabins, Mulfinger has written four books on the subject.

Mulfinger will be speaking about cabins at the Lane County Home and Garden Show. “One talk is called Cabinology, things you should now about if you’re remodeling, building or thinking about building a cabin,” Mulfinger says. “The other is Cabin Architecture Today, which is basically a take on the book I wrote called “Back to the Cabin.” Mulfinger will show examples of new cabins and existing cabins that have been retained and improved.

Throughout his career as an architect at SALA Architecture in Minneapolis, the firm he started 31 years ago, the 71-year-old Mulfinger designed fine homes in the Twin Cities area. He’s also designed numerous cabins, including his own on the shore of Minnesota’s Lake Vermillion, near the Boundary Waters along the Canadian border.

Cabins, generally speaking, are small living structures that may or may not be primary homes. In Mulfinger’s first book, he defined cabins as being between 250 and 1,200 square feet. The book’s sequel, “Back to the Cabin,” looks at projects up to 1,600 square feet.

It’s not just size that defines the cabin. “When I think about cabins I think about their character,” Mulfinger says. “I think once you start attaching a garage and calling something a master bedroom suite, it just doesn’t feel quite so cabiny anymore. I think about openness— you’re not too worried about auditory sounds. In a cabin you prefer intimacy of friendships over privacy. Often a cabin has some place to burn some wood, either a wood stove or fireplace. It has some primitiveness, it can sometimes be illusionary, but I think a cabin has some kind of primitiveness to it.”

The cabins that Mulfinger recorded in his books stretch across North America. Some of the examples are his own designs. There is no right way to design a cabin, but there are some important considerations. “You look for how they use space, how they treat light, how they’re built,” Mulfinger says. “I look for how people built over time. There was the era of the A-frame, so I look at A-frames with additions, because there are many A-frames out there that are sitting on beautiful property and they’ve been brought into the modern age.”

Many cabins are built in remote locations, which present logistical challenges or constraints in what material can be used or can limit the number of builders willing to build there. “We’re building an inexpensive cabin right now in northern Minnesota,” he says. “It’s off-the-grid in a relatively remote site, and it took a fair amount of figuring out who could build there, who was willing to build there.” They found a builder called Wee Cabins in Ely, Minnesota, which uses a timber frame system unique to that particular company.

Mulfinger’s favorite cabin is always “the next one,” he says. In his long career he has been called upon to design both large residential homes and tiny cabins, and yet his cabins don’t have a signature style. “I like designs that are situationally appropriate,” he explains. “Different situations lead to different design needs. I like the fact that certain situations require different ways of building or different opportunities. And then there’s the interest of the people for whom you’re doing this—what do they get fascinated with and what’s their budget?

Saturday, Oct. 11, noon (time may change due to football schedule) 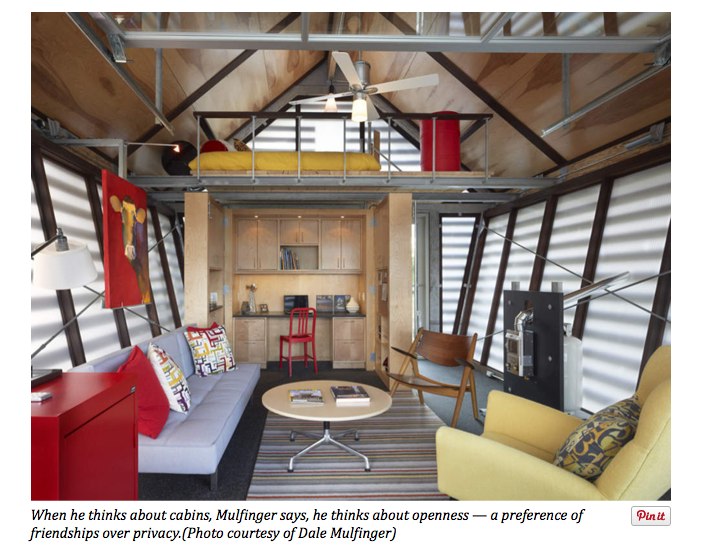 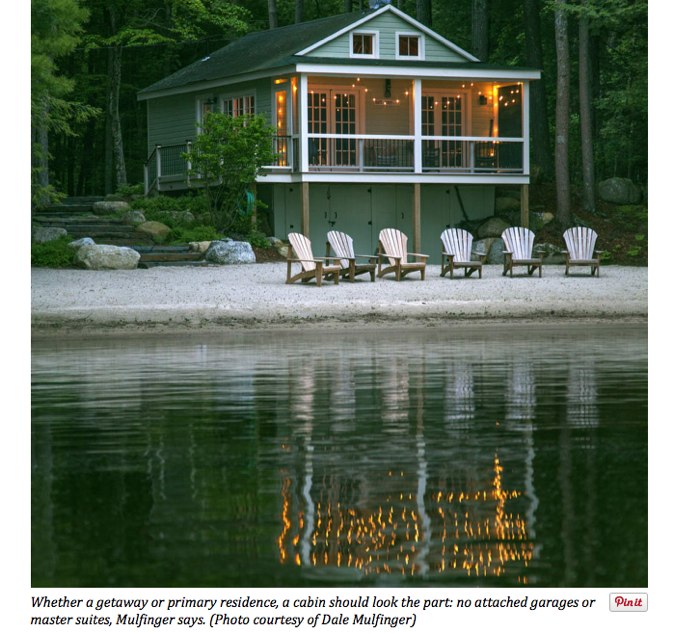