By Vanessa on October 16, 2014 in Arts and Entertainment, Eugene Weekly: Music, Music 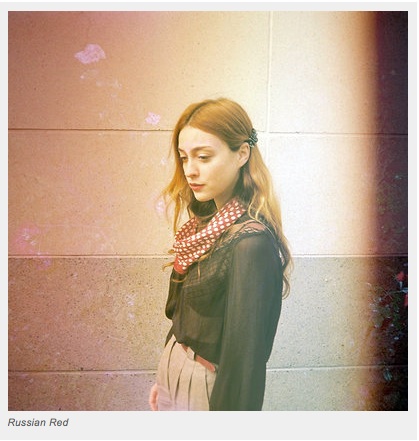 Google the name “Russian Red” and you’ll come up with numerous links directing you to cosmetic shops. That’s because Russian Red is the stage handle of Lourdes Hernández, a Spanish woman who took the name from her preferred lipstick color.

Hernández is from Madrid but writes and sings in accented English. Her songs resemble neither flamenco nor rumba catalane; perhaps a more fitting moniker would be a Spanish Feist, due to her music’s resemblance to the indie-pop singer-songwriter. Many images of Hernández present her as a modern pinup with pale skin, rouge lips and a wash of color on her jacket. The cover of her new album, Agent Cooper, released in February, has her sitting on a pink box, holding an automatic weapon and looking drop-dead gorgeous in a gold dress. (I’m writing this on the day that David Lynch publicly announced a new season of Twin Peaks. Coincidence?)

All this is to say that Hernández is different, and she’s been carefully developing her peppy yet nostalgic pop persona. There’s less spare acoustic music and a lot more instrumentation and electronic influence on Agent Cooper than on her past two albums. Perhaps this is because she’s been inching toward radio friendliness, which she’s seemingly tried to achieve by choosing producer Tony Doogan (Belle and Sebastian, Mogwai, David Byrne) for her second album and Joe Chiccarelli (The White Stripes, The Strokes, U2, The Shins) for this one.

Any song on Agent Cooper is polished enough to be radio-ready. And when radio finally does start playing Russian Red, it will be because she deserves it, not because she’s beautiful and holding a gun.