By Vanessa on March 26, 2012 in Animals
This article originally appeared in the October 2011 issue of SPOT Magazine, about a therapy dog who spent two weeks at Ground Zero helping 9/11 rescue workers cope with the trauma of their experiences. Click to view the full PDF of Tikva the Rescue Dog: Tikva9:11 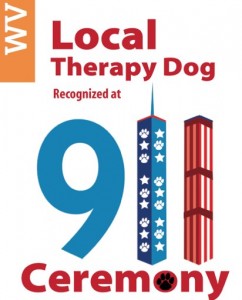 Tikva is a therapy dog, and she and her handler, Cindy Ehlers, spent two weeks at Ground Zero following the terrorist attacks a decade ago, giving comfort to rescue workers.

Tikva was just a year-old pup when the attacks occurred, and now at 11, Ehlers is convinced she remembers the people she met there as well as Ehlers herself does. One of the firefighters that met Tikva during those fateful weeks came to Oregon two years ago to visit, says Ehlers. “She remembered him,” she recalls. “She was kissing him.”

Organizers of the remembrance ceremonies for the group Finding One Another invited Ehlers and Tikva to Liberty State Park in New Jersey for the 9/11 events. The recognition ceremony began the afternoon of 9/11/11 with a speech by New Jersey Senator Frank Lautenberg. More than 1,000 search and rescue and therapy dog teams who served at the 9/11 sites were invited, and current working dog teams lined the processional route honoring the 9/11 teams.

Ehlers’s brother, a firefighter from California specializing in structural support, was also sent to New York to help. He attended the ceremonies as well, and Ehlers also connected with a woman whose husband died in one of the towers. Tikva is the only surviving dog from the Oregon teams that visited the site.

“This has never been done before and it can’t be done again,” says Ehlers, referring to the ceremony

Tikva and Cindy (in yellow hat) at Ground Zero

including dogs who worked the crisis. “In 10 more years there won’t be any dogs left. It’s a once in a lifetime event.” Ehlers wanted to especially acknowledge and thank the Keeshond Club of America for making the trip possible for the duo.

Ehlers, along with another Keeshond named Bear, started as a therapy team years ago through Delta Society’s Pet Partners program, which trains volunteers and their pets to visit hospitals, nursing homes, hospice centers, schools, libraries and many other facilities. Ehlers and Bear responded to the Thurston High School shooting in May 1998. She later founded HOPE Animal Assisted Crisis Response, and joined the Red Cross disaster action team.

After 9/11, the Red Cross called upon Ehlers and Tikva to travel to New York to provide comfort to the workers and family members at Ground Zero. Tikva’s overall health is good, but she is in a health study related to exposure to toxins and pollutants from 9/11. “She does have chronic bronchitis,” says Ehlers. “I call it the World Trade cough. We both have it.”

Ehlers teaches canine citizenship classes, trains dogs for therapy work and offers training for all dogs through her organization, Pawsitive Pets. Today, Tikva is retired from therapy work, but she does assist Ehlers through her work at Lane County Animal Services (more on Ehlers’s work at LCAS appears page 20).

“Tikva is the ‘neutral tester’ dog at the shelter,” Ehlers explains. “She’s the behavior model for dogs who have some aggression or just reactivity. She’s so good around other dogs, she’s non-threatening.”

To learn more about pet therapy programs, contact the Delta Society, Pawsitive Pets, or the Red Cross. Good therapy dog candidates are accepting of friendly strangers, are neutral with other dogs, and don’t easily startle. Ehlers says there are many opportunities for therapy dogs right in their own neighborhoods. “Youth at risk, hospitals, nursing homes, rehab centers, reading education, house fires . . . .” Ehlers says, “It’s unbelievable how much of a need there is.”