By Vanessa on January 12, 2016 in Gardening, Health and Wellness, Register-Guard

Published in the December 29, 2015 issue of Home & Garden, a special publication from the Register-Guard. 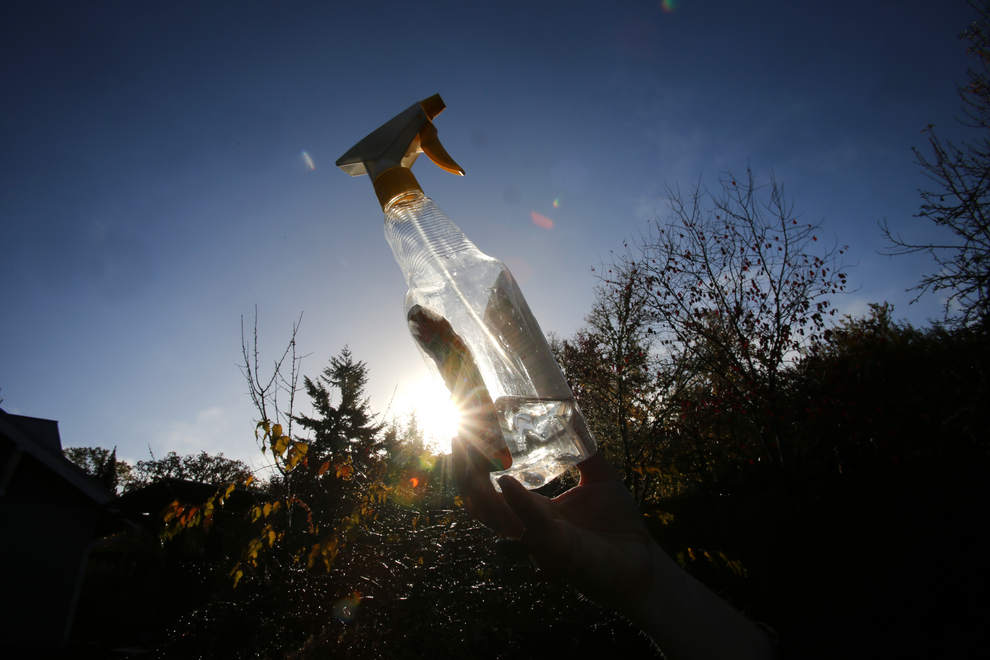 A boiling-hot blend of vinegar, soap and water will kill weeds instantly. If the mix is cooled to room temperature, several applications may be necessary. Photo by Collin Andrew for The Register-Guard.

Tips from the Northwest Center for Alternatives to Pesticides based in Eugene.

Pesticides exist and get used because of one simple reason: They work.

About 1.2 billion pounds of pesticides are applied in the United States every year, says Ashley Chesser, communications manager for the Northwest Center for Alternatives to Pesticides based in Eugene.

That number encompasses all uses, including home and agricultural. Home use is admittedly a much smaller portion of that number, but even spraying your yard adds up.

“Ninety-seven percent of the nation’s urban streams are contaminated with pesticides,” Chesser says. “And of those, 83 percent have levels that are higher than the benchmarks set to protect fish and wildlife. Many of these pesticides are hazardous to human health, they’re linked to cancer, to birth defects if women are exposed during pregnancy, loss of reproductive ability and nerve damage.”

Earlier this year, the most common household pesticide, glyphosate, known as Roundup, was reclassified as “probably carcinogenic to humans” by the World Health Organization’s International Agency for Research on Cancer.

Anyone leery of chemical pesticides should consider alternatives, Chesser says.

First, Chesser advises, reconsider what a healthy and beautiful yard looks like. She contends that many people think the status-symbol yard with no weeds whatsoever is the goal. “A healthy lawn actually has a lot going on,” she says. “There’s going to be clover and other weeds that are creating an ecosystem, so getting rid of everything that makes it a diverse place for creatures and bugs to live is actually not healthy.”

The pyramid first calls for first attempting to create a landscape where pests don’t thrive, such as by clearing debris or removing attractive food sources. “Start with a soil test to see what’s going on with the pH,” Chesser says. “If its got too much acid or lime or sulfur, then it can create a system where weeds are more likely to thrive. A pH of around 6 is better for grass than weeds.”

Manual weed control is next on the pyramid. A couple of tools help here: NCAP recommends weed poppers, which make it easier to pull out weeds by hand, and weed flamers, a small propane torch that burns weeds. “Those are both great tools,” Chesser says.

The next level of control is biological, which means introducing predatory insects or bringing in goats for weeds. Introduce native plants and grasses to your landscape, which will encourage predatory insects such as lacewings and ladybugs to hang out and eat destructive bugs such as aphids. “There’s lots of ways you can adjust the system so that predators aren’t at an advantage,” Chesser says.

The final level is chemical pesticides, which you want to try only if all of your other efforts don’t work. Even then, there are alternatives.

Common household items such as vinegar, water and natural soap can be blended to kill weeds. A common mix is 1 part vinegar, 2 parts water and 1 part soap.

Bring the mixture to a boil and pour it on troublesome weeds for near instant results.

Use less vinegar by spraying on the mixture cooled to room temperature, although this might take several applications. “If you’re using a lot of vinegar, though, you’re changing the acid of the soil, so you’ll need to introduce something to balance it out,” she recommends.

If you have an area so overtaken by weeds that you can’t bare it, simply cover the area with cardboard followed by fresh dirt and compost. Add a mixture of native grass seeds and start over. In the summer, kill weeds via solarization by covering the area with a black tarp.

“The other two things we recommend for pests are insecticidal soap or diatomaceous earth,” says Chesser. The soap repels soft-bodied insects, and the diatomaceous earth, which is an abrasive powder, is for bugs that have a skeletal body, such as beetles and aphids.

The diatomaceous earth’s sharp structure can be used as a barrier around plants, or mixed with a sugar water to get rid of sugar ants. It also can be “puffed” onto plants.

“Use a turkey baster or some other way to make it puff, and puff it directly on the plants if you see a whole bunch of aphids climbing around on it,” Chesser says.

Peppermint oil is a good deterrent for indoor bugs or outdoor insects such as yellow jackets. “Try mixing peppermint oil with some water and spray it around doorways or eaves,” she says. “It will keep bugs away.” 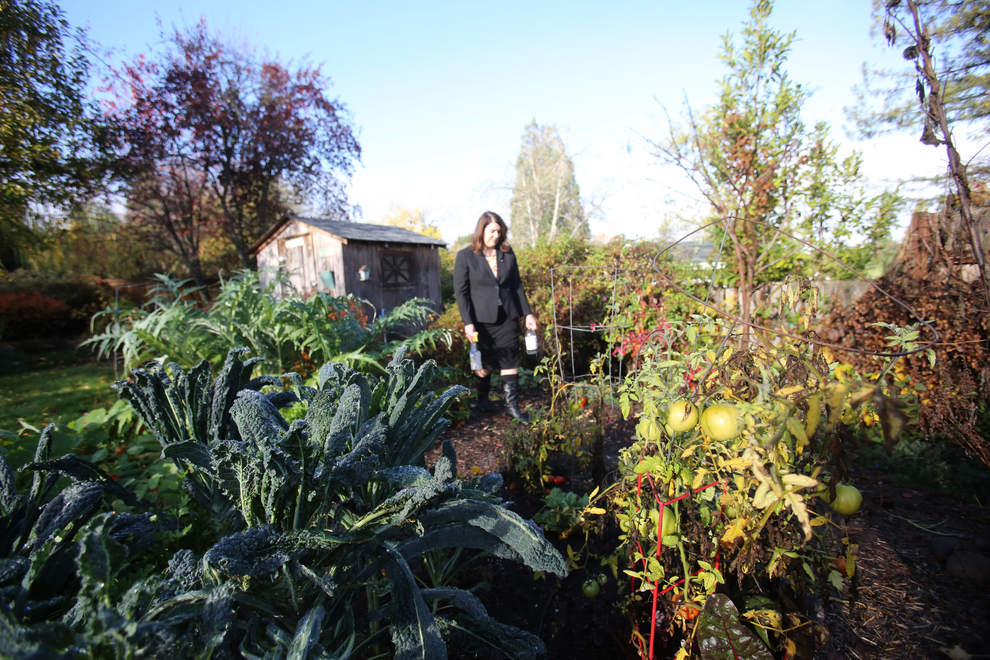 For more gardening tips without use of commercial pesticides and herbicides, contact Kim Leval and other experts at the Northwest Center for Alternatives to Pesticides at 541-344-5044 or by email at info@pesticide.org. For tips online, see www.pesticide.org/resources. Photo by Collin Andrew for The Register-Guard.