By Vanessa on March 17, 2014 in Health and Wellness, Register-Guard

The women I interviewed for this article are a group of friends who motivate each other to get to the gym everyday, even when they don’t want to go. They have each other on group text so they all have to check in with each other about how many burpees they’ve done and where they were doing them at. Published in March 2014 Dash, a special publication of the Register-Guard.

Challenge Will Change You
This group of friends faces their fitness goals head on.

If you’re in the parking lot of Costco or on the ski slope and you see someone doing burpees while someone else takes a photo, think nothing of it. Or better yet, join in! A group of 10 Eugene women along with a handful of spouses and kids have accepted a “100 burpees a day for 100 days” challenge, issued by their fitness coach, Jon Joseph. For the women, this challenge has been “life changing” and “a ton of fun.” Really.

A burpee involves standing, dropping to a squat, then bouncing back up to standing. Jon, a 1978 Exercise Science graduate of the University of Oregon and an Olympic weightlifter, incorporates burpees into his routines because they are efficient, effective full-body strength exercises.

Jon teaches a 5:30 am fitness class at his ReNa studio in South Eugene on Mondays, Wednesdays and Fridays, where he issued his burpee challenge on January 15. The women accepted the challenge, then got the idea that they should share photos to make sure they were all actually doing it. “Everyday there’s a chain of photos and texts saying, ‘I’m done, I’m done,’” says Wendy Hunter, 46. Mischelle Lueders, 49, says that sharing their experiences has given the group a deeper bond. “Even if people have long days we all have that commitment,” Mischelle says. “We’re accountable to each other as well as having fun.” At their classes, Jon leads them in their burpees, but on the weekends, they’re on their own, which has forced some creative solutions.

Audrey Garrett has done her burpees while on a trip to Boston and on the side of the road while her husband changed a flat tire on their way back from Willamette Pass. “The sharing part has added a new dimension to my life,” Audrey says. “It’s creating a new dimension to what would otherwise be just a group of people showing up for a workout.” Mischelle has done hers at the Louis and Clark statue in Seaside. Wendy accomplished hers at her daughter’s basketball tournament. Mischelle says her husband is “extremely proud” of her commitment to working out. He photographed her doing her burpees outside Texas Roadhouse, but drew the line at her doing one inside. “He said, ‘Absolutely not!’” Mischelle laughs. “And I had just finished eating so it was a really difficult burpee to do.”

Burpees can be done anywhere, with no equipment, making them ideal for full-body exercise on the go. “You can do them in slippers or in snow boots,” says Mischelle.

Susan Pavel is one of “the crazies,” she says. “I’ve gone down to San Diego and I’ve done them in the airport,” Susan says. “I was just in Klamath Falls doing them at the Running Y Ranch and asked a bystander to take a picture of me. It’s always in the back of your mind, ‘OK, I said I would do these and it’s pushing 5 p.m., 6 p.m. It’s your own integrity on the line. There’s no one standing over you making sure you do them and I like that.”

Wendy, Mischelle and Kirsten Gram, 52, are no strangers to challenge. Last year they trained for a 100-mile bike ride from Seattle to Portland. This year, they are upping that ante for a 200-mile ride and they credit Jon with helping them believe that they could do it. “You think, ‘There’s no way I could do one more,’ and then you do one more,” Gram says. “He says challenge will change you. It’s an exercise but it also becomes everything you do.”

“Jon says your brain is your biggest muscle,” says Wendy. “You want to stop but you do it and you get through it.”

For Lynette Gorman, the burpees are a family affair. Her husband and their two teenage boys join the workouts during the off-season of their team sports. “It’s a mental game,” Gorman says. “You really have to challenge yourself. You start seeing differences with your body and your strength and then you start wanting to do more. It becomes very competitive at our household. “

Audrey says that at first, 100 burpees seemed like a large number. “But once you get going it only takes about 10 minutes,” she says. “Now I think, if I have 5 minutes I can get them done. Sometimes I have to say, ‘Wait kids, I have to do 10 more.’ I’m getting close to 50 and it’s nice to know that you can get stronger instead of going the other way.” 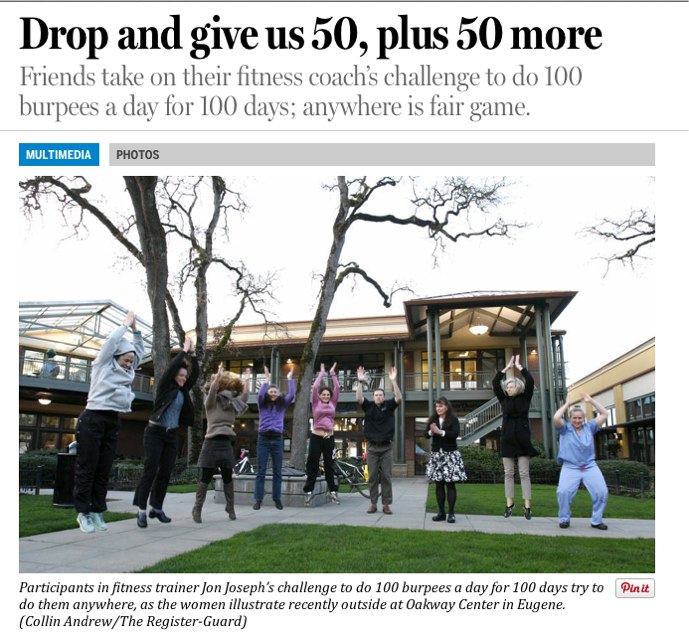 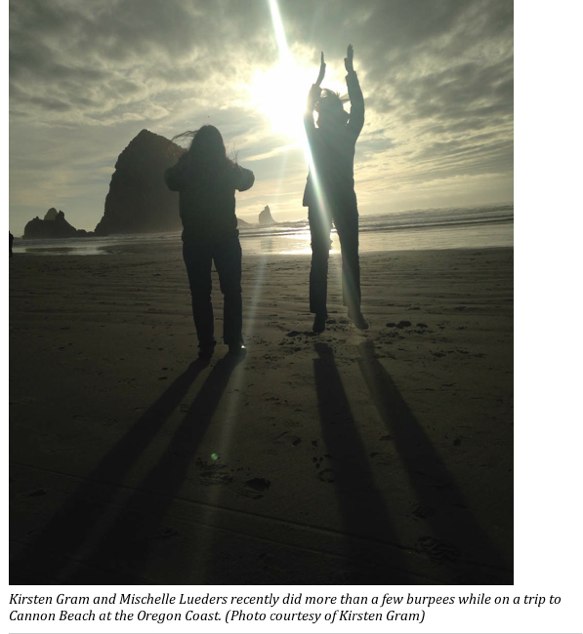 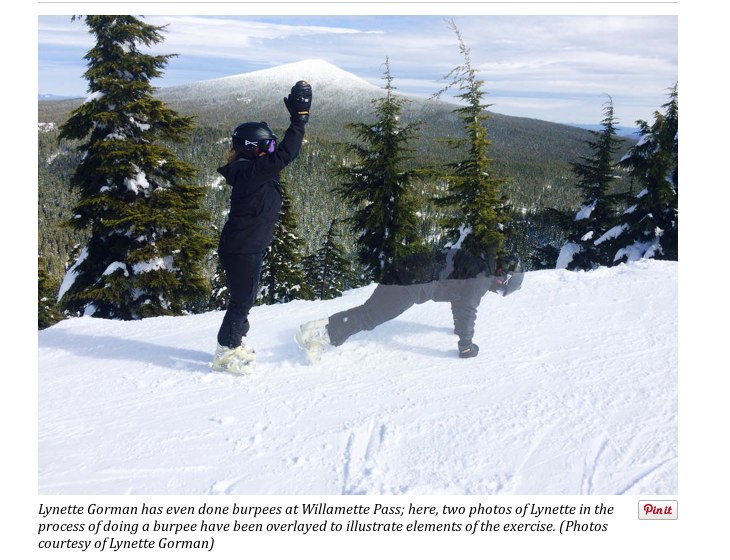 Barnwood Cabinets
It’s Only 4 Letters and This is the Best You Could Do?