By Vanessa on November 15, 2014 in Holidays, Home, Register-Guard

This turned out beautifully. I met with two local women, one a floral designer and the other a floral designer and event planner, who created several demonstration tables using fresh and permanent botanicals and interesting place setting combinations. Their tables were beautiful and most of the florals they used came from one of the ladies’ back yards. I’m pretty sure I could gather stuff from my yard and my centerpiece would not look like hers did. This was published in the Saturday, November 25, 2015 edition of The Register-Guard Saturday Section called Weekend.

Setting your table also sets the mood for your holiday celebration. Whether you choose a traditional or modern style, your decorations don’t have to be difficult or expensive, say two local women.

Tricia Hewitt, who currently works at Thurston Flowers, has been in the floral industry for more than 30 years. She also taught floral arranging classes through Lane Community College and now at the Willamalane Adult Activity Center. Hewitt’s upcoming class, which starts Monday through Willamalane Park and Recreation District, will focus on creating grapevine wreaths using “permanent botanicals,” industry speak for floral elements that are dried or silk.

Shannon Kilduff took one of Hewitt’s classes eight years ago, and is now an event consultant at Parties To Go and owner of her own floral design house, Sun Blossoms Floral.

Hewitt and Kilduff are both experienced, but their styles work for people who aren’t design professionals. They favor simple items such as candles, affordable flowers and leaves, perhaps from your own backyard.

“Someone can go on a walk and pick up most of these elements,” says Hewitt, pointing to a floral arrangement she created for a Thanksgiving table. She sprayed maple leaves with Leaf Shine, a spray that enhances color and helps with preservation. She tucked in rosehips, glossy green magnolia leaves along with magnolia pods, nandina berries and “some grassy stuff.” She poked in store-bought acorns on floral picks. “Take what you’ve got and enhance it,” she says.

This demonstration table is beautifully set with chargers made of wood slices, with moss still clinging to the edges. “You may not have pieces of wood like this but if you wanted to you could cut the wood,” Hewitt says. Your imagination is the only limit. “You could just lay a burlap runner on the table and place little clusters of the rocks and the greenery on that,” Hewitt says. “It would work on any budget.”

Kilduff likes small touches that pull the whole look together. For instance, she favors using the glassware as an integral part of the table setting.

If you’re using a short water glass, a wine glass and perhaps a hot toddy mug, set them all out. “I like that it gives the anticipation of what’s to come in the dinner,” Kilduff says.

Kilduff’s napkin rings are made of lace taped together. “It works,” she says, “and it gives it that little extra touch.”

She also likes touches that add color and texture, such as placing name cards or other decorative items on the plate. She wrote messages such as “love,” “peace,” and “give thanks,” on store-bought leaves and placed them on plates. “This was so simple,” she says, “I used a Sharpie. But you could do this on real leaves using a gold paint pen and make it much fancier.”

Consider touches such as pears or apples, either permanent or real, spray-painted gold and decorated with similar messages.

Seasonal items such as pumpkins and gourds are easy table decorations this time of year. Hewitt hollowed out small pumpkins and used them as taper candleholders. A centerpiece of assorted daisy chrysanthemum, alstromeria, hypericum berries, nandina and salal was tucked into a ceramic pumpkin filled with floral foam. “I’ve made arrangements out of hollowed-out real pumpkins and that works, too,” Hewitt says.

The chrysanthemums are easy to come by. “A lot of people refer to those as ‘grocery store flowers,’  ” Kilduff says. “You could buy that really inexpensive bundle of flowers and turn it into something much more extravagant.”

One of the demonstration tables displays a traditional cornucopia as a centerpiece. Again, Hewitt used foraged floral elements such as purple hydrangeas enhanced by store-bought dark purple plastic grapes. “Cornucopias have a tendency to fall over,” Hewitt says, “so I’ve taken a bag of rocks and stuffed it into the back so it sits how it should.”

In addition to the large centerpiece, Hewitt and Kilduff placed small grapevine wreaths, enhanced with the same natural materials, down the center of the table. “Rocks and pine cones could be the smaller pieces instead of these wreaths,” Kilduff adds. “You could also choose to put things in pieces, such as mason jars filled with things that you collect. When I do a big sit down dinner I make a centerpiece that I can take apart into lots of little pieces to send home with my friends.”

A modern take on a table setting uses a brown and white sequined tablecloth in a chevron pattern, square white dinner plates and a Phalaenopsis as a
centerpiece.

In this case, “you let your linens be your table decorations,” Kilduff says. “If you’re just having one other couple for dinner, they can take home the Phalaenopsis and you’re done.”

Let nature be your guide: Use natural elements as your decorations. Go for a walk and gather leaves, rocks, moss and pine cones. Bare branches may not seem like much on their own, but they come to life when combined with other natural elements.

Enhance “grocery store flowers”: Bundles of orange and yellow chrysanthemums can be purchased from most local grocery stores for less than $10. Enhance them with other foraged natural elements or store-bought items for a unique and affordable look.

Think in pieces: Create a centerpiece using individual elements, such as candles or flower-filled mason jars. When your event is over, dismantle the centerpiece for individual items your guests can take home.

Let your linens shine: Keep your tabletop simple and use a richly colored linen on your table, such as a deep purple, along with orangey-red roses. Or go modern using a patterned linen with square white dishes and clear stemware.

Flowers really do make a difference: In 2005, Rutgers University researchers Jeannette Haviland-Jones and husband Terry McGuire performed several double-blind studies involving presenting participants with one of three gifts — a decorative candle, a fruit basket and a floral bouquet. In every case, the recipients responded to the flowers with what is clinically described as a “true smile.” Neither the candle nor the fruit elicited the same positive response.

Tricia Hewitt is teaching an “Autumn Floral Clinic” through Willamalane Park and Recreation District from 6:30 p.m. to 8:30 p.m. Nov. 17 and Nov. 24 at Thurston Flowers, 5892 Main Street #7, Springfield. Students will create a seasonal grapevine wreath for a home’s entryway and a centerpiece for Thanksgiving using fresh flowers and permanent botanicals. Cost is $18 for in-district residents, $22 for out-of-district residents; register at willamalane.org.

Shannon Kilduff will teach a class about party planning in January 2015 through Willamalane Park and Recreation District. Students will plan a timeline for their event, whether it’s an intimate dinner party or a large celebration. At the end of the three-week class, students will create a tablescape for their event; willamalane.org. 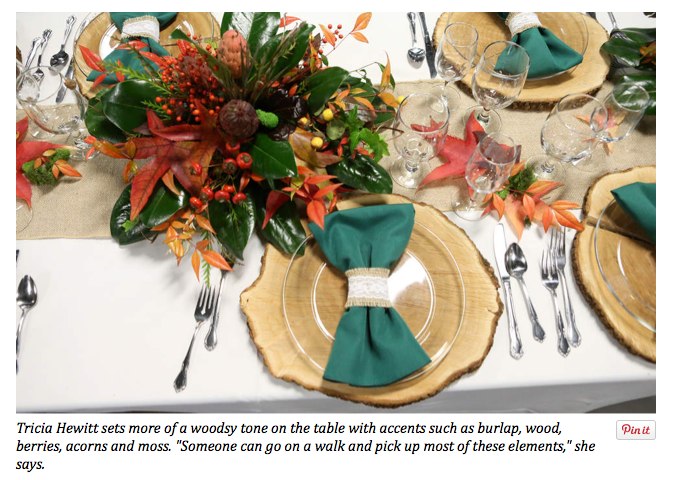 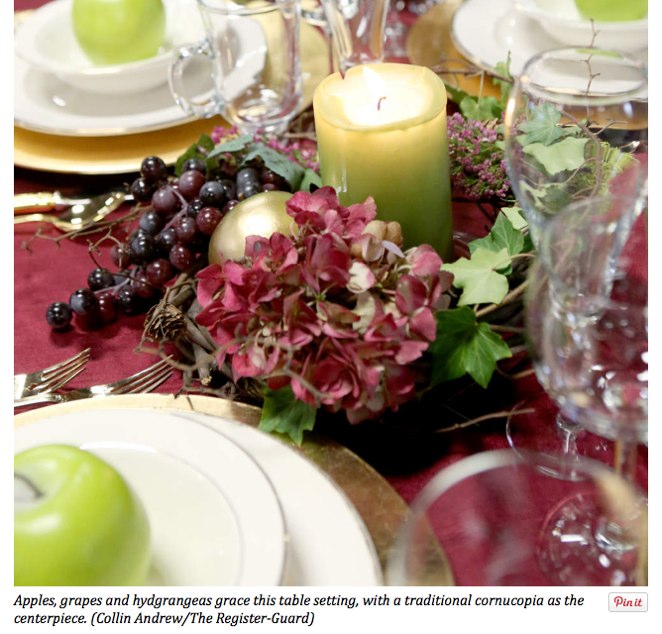 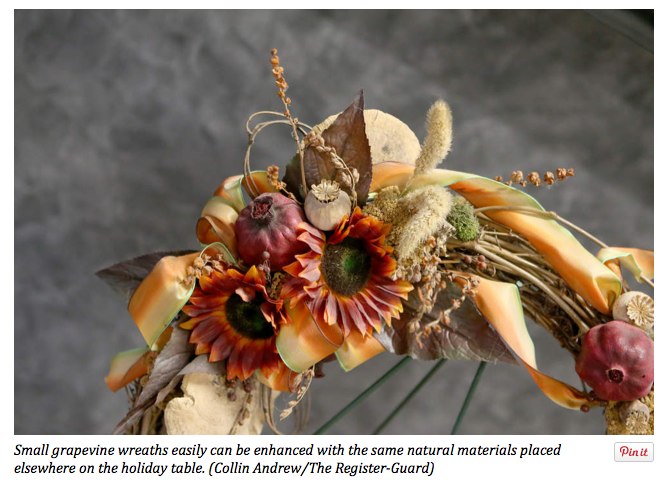 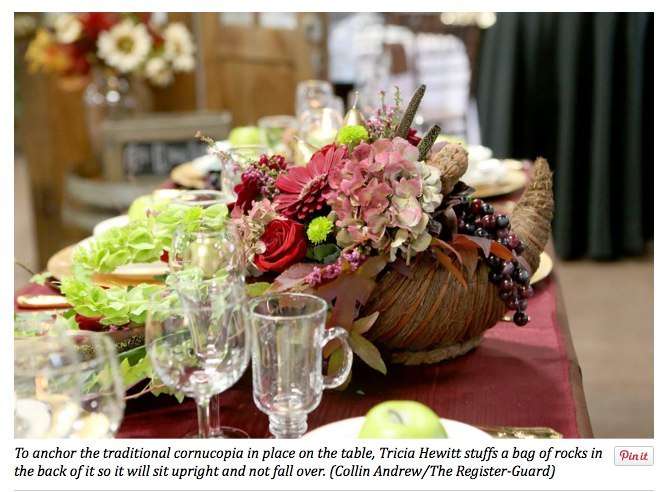 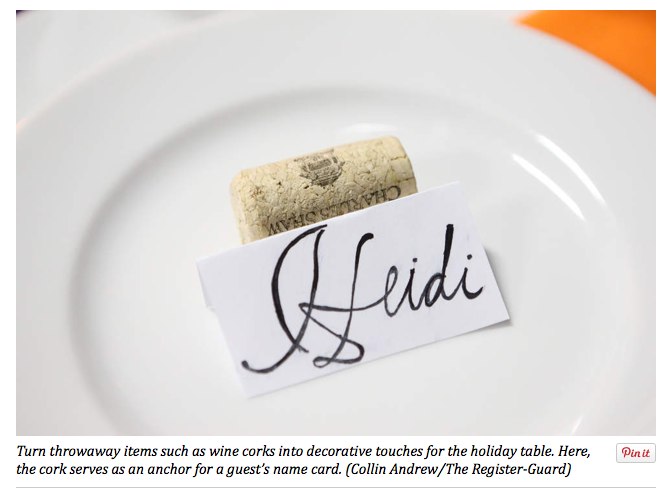