By Vanessa on November 29, 2014 in Boomer and Senior News, Health and Wellness, Retirement, Seniors

This article appeared in the November 2014 edition of Boomer and Senior News. It’s about a local program to provide GPS tracking wristbands (or ankle bands) to seniors or children who have dementia, autism or some related issue that causes them to wander away from their caregivers. In the published article I was given credit for photographs that were provided by Lane County Sheriff’s Office, although I did take the one of search and rescue coordinator John Miller at his desk. 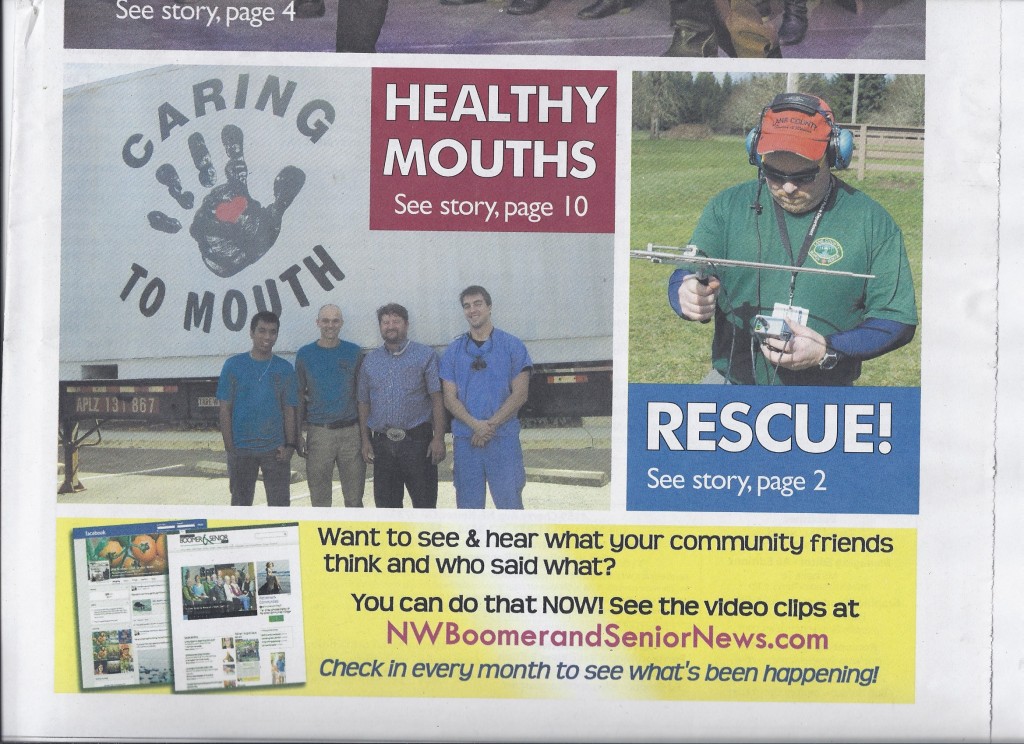 For people of all ages who have a tendency to wander, there’s a life-saving program in town. It’s called Project Lifesaver, and John Miller wants you to know about it.

“I don’t call this program a silver bullet,” Miller says, “but it’s a darn good thing.” Project Lifesaver is a national program that utilizes a small wristband transmitter to track children and adults with autism, Down syndrome, Alzheimer’s and other forms of dementia, or related conditions that may cause them to become disoriented or wander away from their homes or care facilities. If someone with a wristband does go missing, the caregiver can call local law enforcement to activate a team of people with the equipment to track down the missing person.

The Project Lifesaver program was established locally 8 years ago with a grant provided by SELCO Credit Union. “SELCO’s donation allowed us to buy the tracking equipment and some bands and some transmitters and get folks into the program right away,” says Miller, the local program coordinator. His team has equipment for five or six clients and right now they have only two clients. “I’m all about getting the word out about this program,” he says. “I want us to have a wait list.”

Miller, a 64-year-old whose idea of recreation is mountaineering and off-road camping, has been involved with search and rescue for 32 years—20 years as a staff member with the Lane County Sherriff’s Office and 12 years before that as a volunteer. Before that, his volunteer time was spent with Eugene Mountain Rescue, a group specializing in search and rescue in mountainous or backcountry areas that require mountaineering skill. “I’ve always had a passion for it,” he says. “The Sherriff’s Office had a job opening so I took it. I like the job because I like to help people, and I have 200 wonderful volunteers who make the Project Lifesaver program what it is.”

With that many years spent out in the field, Miller has some happy-ending stories and some not-so-happy stories. One experience that stuck with him happened in Eugene in the mid-1990s. “Eugene had a guy go missing who had dementia, who was in a care facility in south Eugene,” says Miller, who was volunteering at the time. “We looked for him three or four days.” The man was found a year later in a creek drainage just a mile away from where he wandered off. The worst part for Miller, though, was that his body was found by some children playing in the blackberries. “That left a forever impression on me. I even remember the guy’s name.”

After that, Eugene had another person go missing, in a field off Coburg Road. He, too, was found dead weeks later. “I thought, ‘There’s got to be a way. There’s got to be a tool,” he says. “So I’ve always been looking for a tool that would help those people out.”

Each Project Lifesaver wristband has a different signal, which the tracking equipment hones in on. “It’s quiet when we point it this way and it gets louder when we point it that way,” says Miller. “We zero in on them and find them, usually within 30 minutes, and that’s much better than hours or days or not at all.”

So far, Project Lifesaver in Eugene has had to make only a handful of searches, but they’ve all been found quickly. Nationwide, Project Lifesaver reports that they have more than 1,300 participating agencies throughout North America (including Canada) and Australia. Over the past 15 years they have performed more than 2,800 searches with no serious injuries or fatalities. Project Lifesaver reports that program participants who go missing are found 95 percent faster than people who go missing who are not part of the program.

Project Lifesaver is a fee-based program, though often insurance will cover it. Leasing the wristband for the first year is $300 and $100 for each successive year. Scholarships are often available for people with no insurance or people who truly can’t afford the program. Miller says, “We’ll do what we have to do to get them taken care of.” That $300 provides a year’s supply of batteries and wristbands. Inside the wristband is a large watch-type battery that is changed monthly. The wristband is permanently attached, so Miller’s team must cut off the wristband to replace it with one with a fresh battery. “We tell the client, ‘these are special scissors,’” he says. “We take medical scissors and kind of make a game out of it. Our labor and our fuel and our visits are all free. It’s not a profit thing, it’s a public service. We’re not out to make a bunch of money on it.”

These visits are an important part of the program. “We visit with the caregiver and the client so that we maintain a good rapport with both of them, which is really important because you get to know their quality of life plus the status of their health as far as the client goes,” Miller says. “We get to talk to the caregiver and they can tell us anything that might be pertinent to what we’re doing.” For instance, if the client has become more agitated or confined, or if they just sit in their chair all day and don’t go anywhere.

There are some key eligibility criteria. The first step to joining the program is to have the caregiver call Miller or the Sherriff’s Office. After that, an interview is set up, to get to know the caregiver and the patient. The patient must have a form of mental illness that causes them to be likely to wander, and they must be compatible with the program. For instance, the patient must have essentially around-the-clock care. “If the caregiver leaves the person in the house for a day by themselves, it’s not going to work,” says Miller, “because if they go missing for a whole day they’re going to be really hard for us to find.”

Some patients don’t like to have things permanently attached to their wrists or ankles, so if that’s the case, they’re not a good fit for the program. Miller has had a couple of wristbands smashed by people who are trying to take them off. “Those people aren’t compatible with the program and we’re pretty up front about that,” says Miller. “So once we decide this person can fit in the program we’ll go out for the visit, take the device, talk to the caregiver and explain how the program works.”

Once that’s done, then the patient and caregiver can simply go about their normal routines. “What this does allow is for a caregiver to go to the grocery store or go to bed at night and if the person goes missing they call right away and we go find them,” Miller says, “so it gives them a little comfort that way.” The caregiver can relax a little or d some activities on their own, such as go to dinner. For patients who are accustomed to taking a daily walk around the neighborhood, the caregiver can feel more assured about letting them go. “If they don’t come back, pick up the phone and call us or call 911 and we’ll be out there with a team, pronto,” says Miller.

There are other tracking tools, but Miller likes Project Lifesaver the best. He says that cell phones with GPS technology can be used to track people, but the phones don’t always stay with the patient. And, in rural Lane County there are many areas without cell phone signals. Other devices can be set up which use an electronic fence with an alarm that goes off when it is crossed. “But if they get out of that fence, what’s next?” he says. Each option has pros and cons and aren’t perfect. There is a downside to Project Lifesaver as well—it requires the caregiver to call Miller or call 911 as soon as the person goes missing. “Because if they get 100 miles away from us we wouldn’t be able to track them unless we got to within a couple miles of them so we’d lose them that way,” he says. “It’s not an automated system. It’s imperative that the caregiver calls when they find them missing, and then generally they only go a short distance.”

Miller says that people with dementia or related conditions exhibit some patterns of behavior that simultaneously makes them easier to find and also places them in more danger. For instance, wanderers, as they are called in the search-and-rescue parlance, will generally not travel great distances but will often travel in a straight line. They tend to go right out their door and continue in that direction until they find something that will not allow them to go further. “They’ll burrow into blackberries,” says Miller. Water appears as a flat surface to people with dementia, so they’ll walk right into it.

Miller says that wanderers often become fixated upon reaching a particular place or thing that they recall from their past. He relates a story of a Cottage Grove man who went missing a couple of years ago. “He took off in his car and he went out toward Brice Creek in winter and got his truck stuck in the snow,” he says. “He continued walking until he died. He was fixated on going to the casino down by Roseburg so he was heading out on the route that he was familiar with that goes over the top of the mountains.” This man was not part of Project Lifesaver.

One man who was part of the program went missing not too long ago. He was found by volunteers just a few blocks away from the Lane County Sherriff’s Office. The volunteers knew him and he knew them, so they quietly walked up to him and got him back to where he was supposed to be.

Miller and his team of volunteers work closely with the Eugene and Springfield police departments and state police on any sort of lost- or missing-person case, both criminal and non-criminal. They work with the fire department to help with evacuations, which they’ve been recently doing because of the forest fires burning near Oakridge. The team does a lot of outreach to teach outdoor safety to both children and adults. “We’re kind of like the firemen of the Sheriff’s Office,” says Miller.

Miller says that he plans to retire soon, although, he admits, he’ll still be helping out as a volunteer. He’s passionate about being able to locate people who go missing, whatever the cause. And, he hopes, someday those people will all be wearing Project Lifesaver wristbands.

More information on the national program can be found at
www.projectlifesaver.org 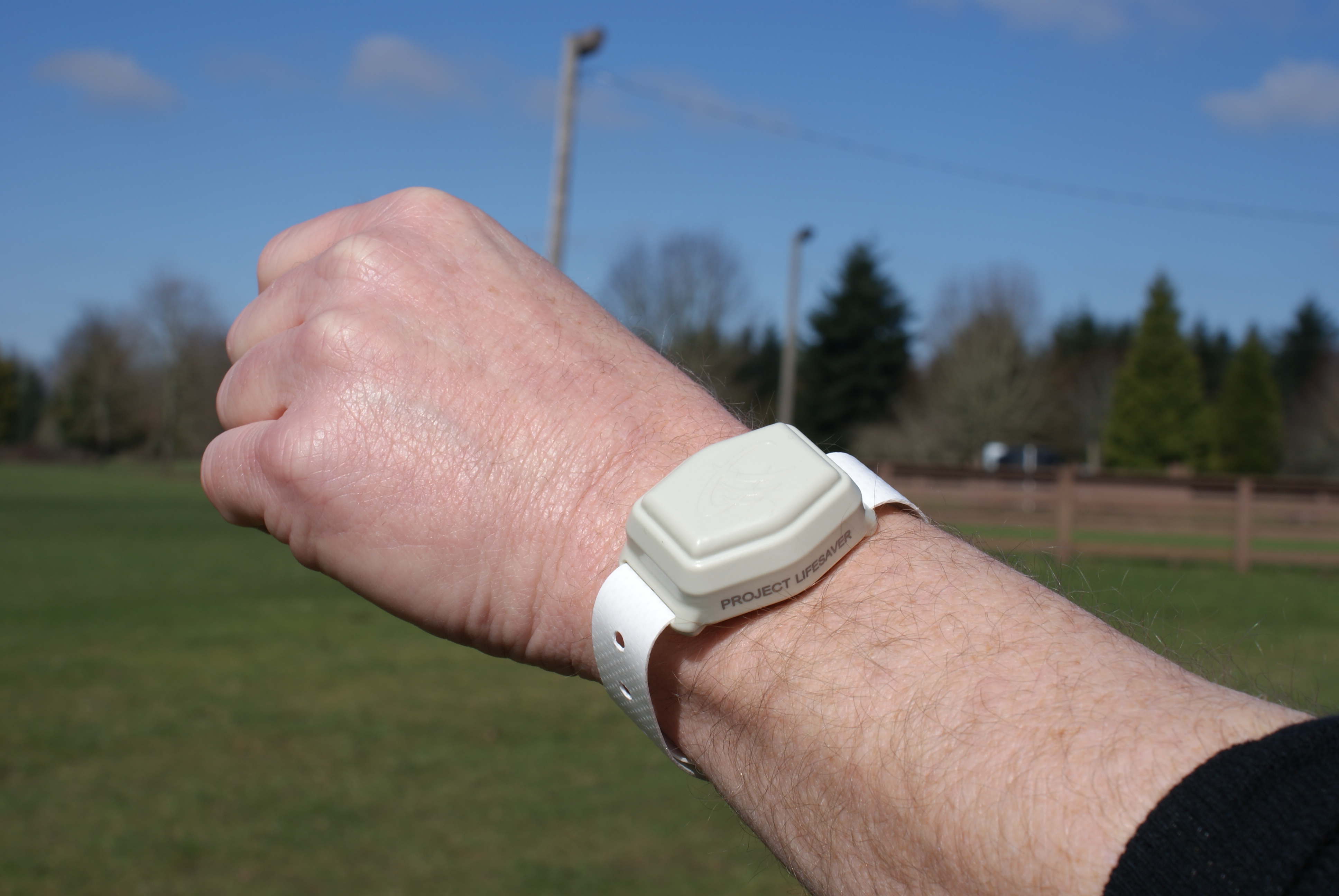 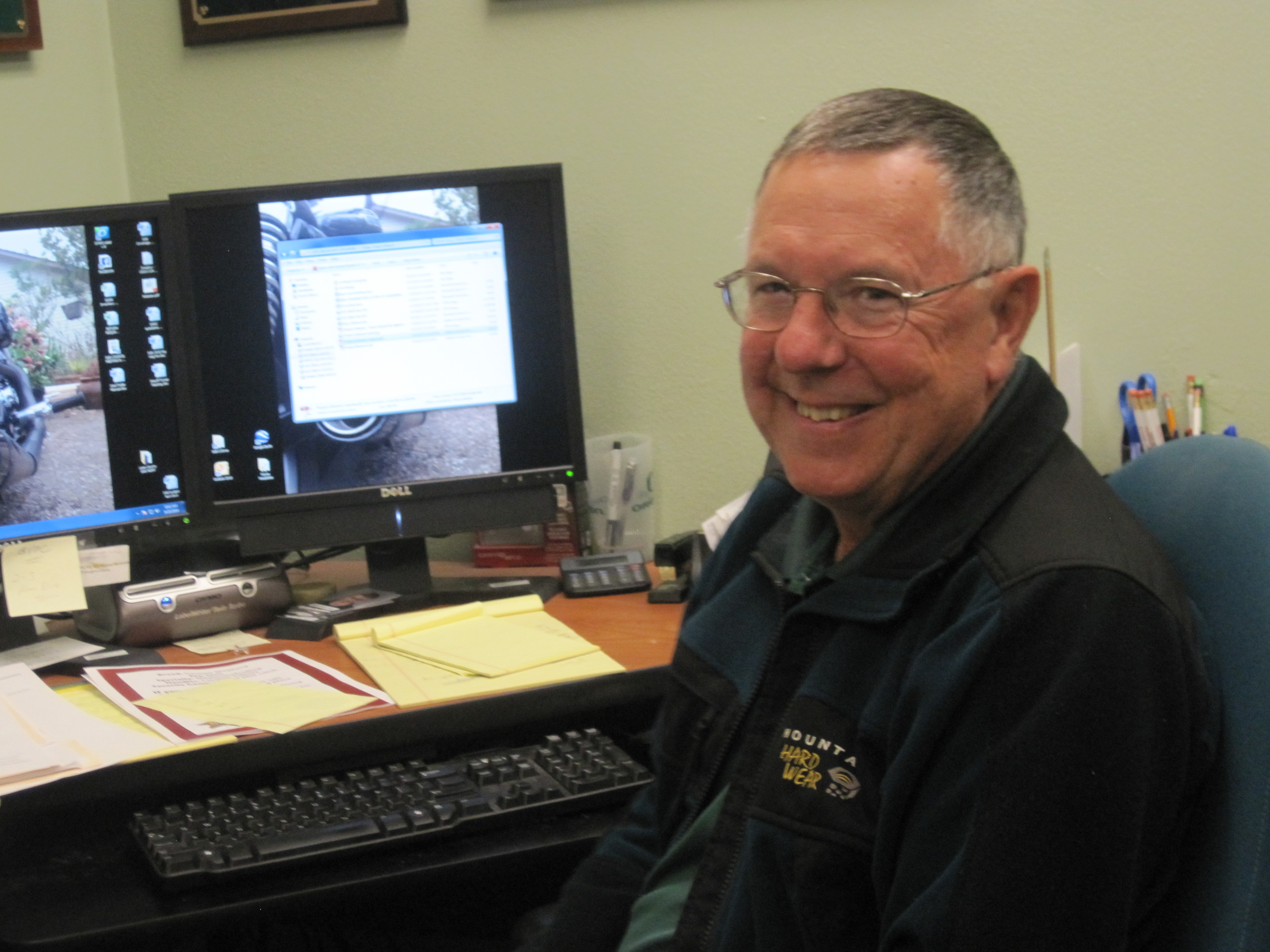 John Miller, the Search and Rescue Coordinator with the Lane County Sherriff’s Office, wants more people to be part of the Project Lifesaver program. Photo by Vanessa Salvia