By Vanessa on March 21, 2015 in Animals, Outdoors, Register-Guard

This appeared in the Saturday, March 21, 2015 Weekend section of the Register-Guard. 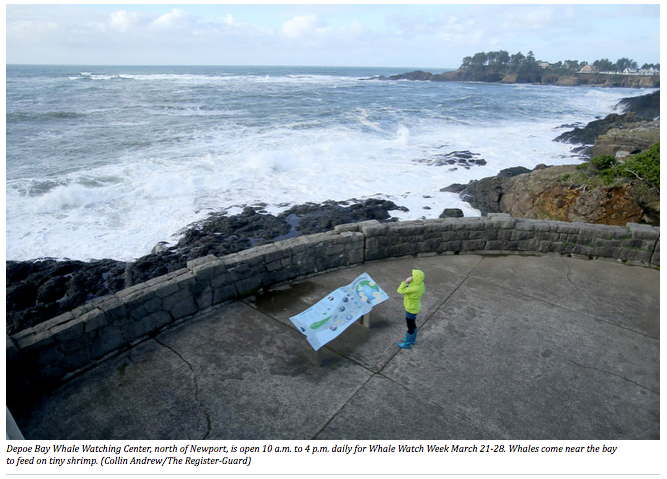 About 20,000 gray whales pass by the Oregon Coast beginning in early March on their way to northern feeding grounds in the Bering and Chukchi seas. They turn around in October, returning to breed in Mexico’s warm lagoons, so the chances of seeing whales along the coast are good to great, particularly during the peak weeks at the end of March (starting today through March 28) for the spring and at the end of December for the fall.

Not for me, though. I got skunked at whale watching so often that it became a joke between my husband and me that the whales fled when they sensed me approaching the water. Even a whale watching boat excursion turned up nothing.

Eventually my curse was broken and I did see whale spouts from shore in Newport and several whales from a boat in Depoe Bay.

But it can be hard to know what you’re looking for, which is why a small army of Whale Watching Spoken Here volunteers takes position at sites along the coast, including more locally at the Sea Lion Caves turnout north of Florence, during the spring and fall watch weeks.

Renee Fowler is a park ranger at the Depoe Bay Whale Watching Center and coordinates the volunteers, who observe the locations of whales and record their numbers, as well as to help visitors identify whales in action.

“Volunteers are the reason for the program’s success,” she says. “This is one of the biggest onshore whale watch programs that’s organized within the United States. Volunteers are available to speak with visitors from 10 a.m. to 1 p.m. during designated watch weeks and they stand out there no matter what the weather conditions are.”

All the better, then, for visitors to see whales.

Whales, where are they?

Gray whales grow to 40 feet long and reach a weight of 40 tons. They feed by filtering water through their baleen and eating primarily large numbers of tiny crustaceans called amphipods. There are no amphipods in their breeding lagoons, so the whales have not eaten since they returned to the warm water last fall. Most of the population continues to the cold northern waters where they will eat their fill before returning south. However, a small number has bypassed this journey by finding an alternate food source in Depoe Bay, which is sometimes called the Whale Watching Capital of the Oregon Coast.

“What we have seen over the years is that some of these whales are actually stopping around the Depoe Bay area and feeding here rather than continuing on to Alaska,” Fowler says. “They are feeding on little mysid shrimp that are in swarms in the kelp beds. We have kelp beds right along the shore line and what we can tell is they are coming back here each summer and staying here all summer long, sometimes just a quarter mile off shore. They’re so close you can see any markings on their body and they tend to feed in the same area up to 1 to 2 hours sometimes, so you can literally sit and view them for a long time.”

Fowler says these 200-some grays are not full-time residents. “They do still leave at the end of October through November and head on to that southern migration,” she says.

You’ll have the best luck spotting the rest of the population on a clear day. Spotting of a tail fin, called a fluke, or a spout, is possible with the naked eye, but viewers on windy or foggy days are at a disadvantage. “You’ll have the best chance if you have a panoramic view from above,” Fowler advises, “so you can see that spout come up. That would be better than standing right on the beach where you can’t see over the top of the water.”

The 24 Whale Watching Spoken Here locations are chosen for their panoramic overlooks. The northern-most location is at Cape Disappointment State Park in Ilwaco, Wash. The southern-most point is Crescent City, Calif.

“In Lane County a great one is the Sea Lion Caves turnout where you can see miles and miles to the horizon and to the north and south,” Fowler says. “Another one would be Umpqua Lighthouse, which is south from Sea Lion Caves, and to the north, Cook’s Chasm and Cape Perpetua Visitor Center.”

When whales come up to breathe a vapor mist will shoot six to 12 feet into the air on a clear, still day.

“They typically breathe in a series of three to five breaths and then they’ll be underwater for about five minutes,” Fowler says.

It’s easy to mistake spouts for whitecaps or vice versa. Select a landmark or starting point, because if you are seeing a whale you should be able to observe it coming closer.

“That’s how we count them,” Fowler explains. “We start watching at one location and then when it goes by we start looking for others to count.”

Gray whales travel about 3 miles per hour and are always on the move, so you can spot them anytime.

The spring migration continues through May, Fowler says, so there’s time if you can’t make it to the coast during Whale Watch Week.

“And in May we start to see mothers with calves, so that’s a great viewing opportunity as well,” she says. “It doesn’t cost very much, just gas, and you definitely can just pull over and watch. It doesn’t require you to bring anything other than layers of clothing and maybe some rain gear and binoculars if you have them. It just takes a little patience.”

Spring Whale Watching Week begins today and ends March 28, but whales will continue to be visible through May as they migrate to warming northern waters.

Volunteer hours: During the peak week, volunteers are manning 24 designated whale watch sites along the Oregon Coast. Volunteer hours are generally from 10 a.m. to 1 p.m., with volunteers expected to work at a watch site a minimum of two days. Many volunteers work additional days, however.

Viewpoints closer to home: In and near Lane County, from south to north, visit the Umpqua Lighthouse State Park (in Reedsport); the Sea Lion Caves turnout north of Florence on Highway 101; the Cook’s Chasm turnout and the Cape Perpetua Visitor’s Center, both near Yachats.

Whale center: In Depoe Bay, stop at the Depoe Bay Whale Watching Center on Highway 101. Open daily from 10 a.m. to 4 p.m. during Whale Watch Week, closed Monday and Tuesday otherwise. Park rangers are on site. Information on boat charters also available at the site. Call 541-765-3304 or 541-765-3307; or email whale.watching@state.or.us. On the web, visit whalespoken.org. — Christine Sherk 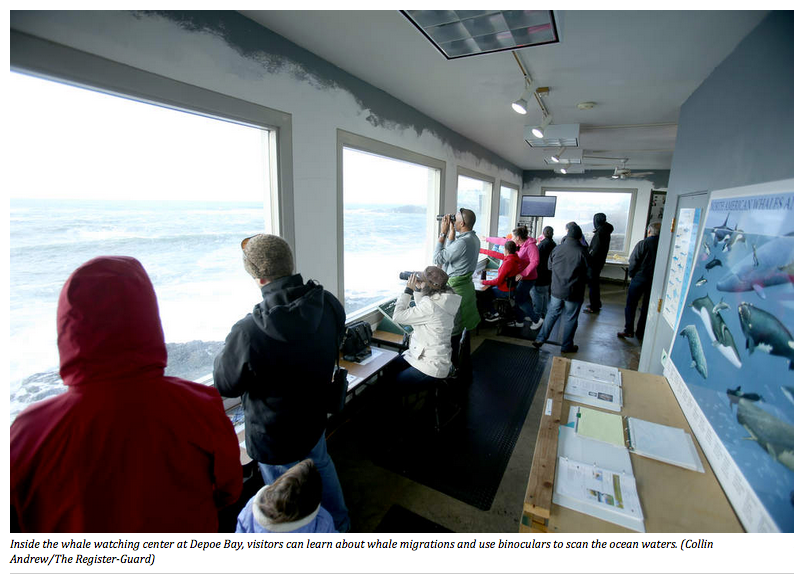 This time of year gray whales are on the move, and they’re not far from our shore.