This one, for the July 11 Register-Guard section Weekend, was fun to write because it wasn’t just a typical fair overview. I put in a research request to the Lane County Historical Society to learn about the fair’s origins and realized that the first fair went back many more years than I thought — all the way back to 1859, when Oregon’s statehood was founded. The current administrators of the Lane County Fair were largely unaware of this history, so I shared the documents that my research uncovered. Hopefully everyone will get a renewed appreciation for this fun annual event and its agricultural roots.

From textiles to florals, from small animals to livestock, entries span many categories, harkening to event’s competitive roots 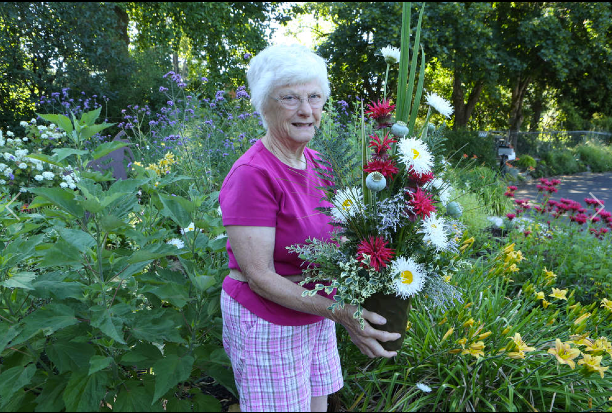 Jackie Getty of Eugene builds a floral arrangement similar to what she will be entering in the Lane County Fair this year. Getty’s success depends largely on the weather and what’s in prime condition within her garden when it’s time to exhibit. Photo by Collin Andrew/The Register-Guard

It took only 13 years for the first settlers in Lane County to organize a county fair.

According to the “Lane County Historian,” a Lane County Historical Society publication, the first fair was held in “Eugene City” Oct. 11-12 in 1859, the year Oregon earned statehood. Awards totaling $80.75 were offered for the best examples of livestock, butter, cheese, field crops, garden produce and fruit.

The present-day Lane County Fair — this year July 22-26 — offers opportunities for competitors in those and many other categories, including baked goods, floral arranging and quilting and textiles.

Martin, 60, entered baked goods and land products (such as fruit, veggies, herbs, eggs, honey) into fairs as a child in Ventura, California, and has entered them in the Lane County Fair since 1990.

“I always loved fairs,” she says. “I entered since I was a little kid and have been baking since I was old enough to sit at the bench with my grandma and Mom. My grandmother and my mother were both very big on baking things like yeast breads and pies. I went into the quick breads and cakes and cookies and candy; that was my favorite thing to do.”

Martin normally “goes crazy” and enters the maximum of 24 items each time. This also qualifies her for the High Point Baker Award, which she won in 2008 and again in 2013.

For Martin, the fun is competing against others for the bragging rights of who has the best items. A few years ago she got $10 and a plaque for her Best of Show pumpkin.

“Out of everybody in Lane County who entered pumpkins, mine was the best,” she says. “It’s kind of exciting. I’m sure there were hundreds of better pumpkins than mine out there but if you don’t enter it you’ll never know.”

Jackie Getty, 78, regularly enters florals and produce in the Lane County Fair. Her love affair with entering fair exhibits started when she took her three daughters to look at the produce on display when they were children.

Their first entry was for beans in the early 1970s. “The kids found 18 beans that all looked alike, and you don’t know how hard that is to do,” she says. “I think it’s more fun to go to the fair and see how you did compared to everybody else.”

Getty enters her own flower arrangements in the floral department in the open and advanced amateur classes using flowers and foliage from her yard. Her success depends largely on the weather and what’s in prime condition at fair time. She won’t know until the last minute what she can create based on how her roses, Shasta daisies, Lady’s mantle, hydrangeas, verbena boxwood and yarrow look. She’s waiting for her artichokes to dry, because one of the arrangements is required to have a vegetable in it.

Entering a time or two also helps to get a feel for what the judges like. “You enter and you get their comments and then you can do a little better job next year,” she says.

Sherry Cossey is the floral coordinator for the fair. For her and for others, part of the fun of entering is to share the flowers and potted plants that they have put so much care into tending. She says making the floral designs is fun and creative. “I love making the designs,” she says. “They really are floral art!”

After that first fair in 1859, a second fair was held in 1861, and then no others occurred until the Lane County Agricultural Society sponsored a three-day fair in 1884, which gradually transformed into the fair we have today.

The modern Lane County Fair is held at what we know as the fairgrounds, or Lane Events Center, but it was held previously at Bangs Park. Sale of livestock from the 1908 fair raised enough money to acquire the present fairgrounds. Today, the fair encompasses a 36,000-square-foot livestock arena and six expo halls ranging in size from 6,500 to 8,200 square feet each.

That’s plenty of room for large-scale exhibits such as quilts and textiles.

Kathy Langston, 63, first entered her quilts 20 years ago. She works all year to create one or two quilts for display. She entered two quilts last year and placed second and third.

“That made me feel pretty good,” Langston says. “I always enjoy people coming in to look at the quilts and ‘ooh and aah’ about them. To see people looking at your work and appreciating what you’ve done makes you feel good and it makes you feel like you’ve accomplished something.”

Between Langston and the other quilters, there are usually up to 50 quilts to check out. Other fiber art such as knitting, weaving and cross stitch also is represented. “The talent is awesome,” Langston says.

Up to the Judge

The following judging sessions are closed to the public leading up to the fair, but the entries will be on display for the public during fair hours:

The following judging sessions are open to the public during fair hours:

Note: Judging times also are detailed atthefair.com, but may be subject to change. 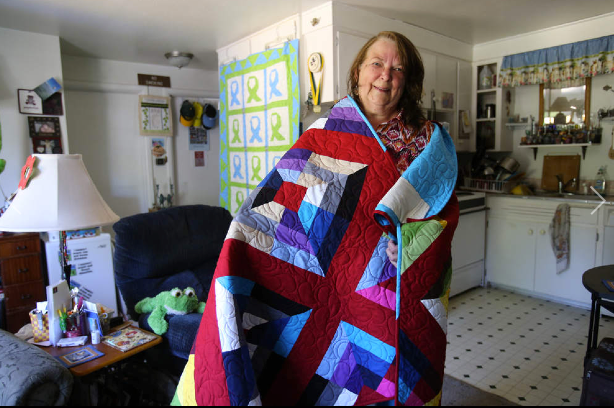 Kathy Langston of Eugene is entering this quilt in the 2015 Lane County Fair; textiles will be judged on Wednesday at the fairgrounds. The fair opens July 22. Photo by Collin Andrew/The Register-Guard

CrewBoss: When “Sort Of” Flame-Resistant Just Won’t Do
Gary Fish: Master of Craft