By Vanessa on November 29, 2014 in Boomer and Senior News, Health and Wellness, People Profiles, Retirement, Seniors

My editor at Boomer and Senior News had heard about the life coach who gave this presentation, Nathan Schulman. I heard him talk for an hour to about 15 senior citizens, many of whom seemed to pay attention to his message. 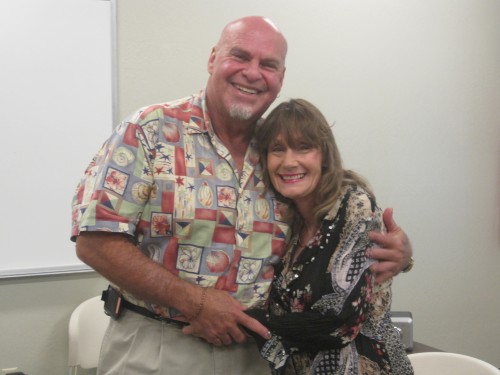 Paula Manzano, 63, spoke with Nathan Schulman with some of her challenges in finding happiness at Schulman’s recent talk. Photo by Vanessa Salvia

Nathan Schulman, a life coach, says he doesn’t hold the secret to the key to happiness. Though he was leading a recent talk at the Willamalane Senior Center in Springfield on the subject of finding happiness, the 65-year-old Schulman says that everyone already knows the secret to happiness; his job is simply to make us aware of it. “The choices that we make are the crux of the whole thing,” Schulman says. “Once you realize that we have the choice and can make the choice to be happy.”

As attendees for his talk gathered, Schulman punched ‘play’ on his radio and the lively sounds of Pharrell Williams’ song “Happy” started to reverberate throughout the room. Schulman was in the middle of the room, clapping and bouncing. Sixty-three-year-old Paula Manzano got up and started to dance along with him, apologizing for her lack of skill. Turns out, Manzano had broken her back several years ago and moved rather stiffly. Still, she boogied with all she had while the song played.

Others in the audience stayed in their seats, but the infectious rhythms of the song caused many of them to start moving a little, even if it was just snapping their fingers or tapping their toes. Schulman’s intent by playing that song was to break the ice, and, to get people thinking about what makes them happy. “Over the past couple of weeks since I knew I was going to be giving this talk I’ve been thinking a lot about happiness,” Schulman says. “I’ve been asking a lot of people, ‘What makes you happy?’ And you know what the most common answer is? ‘I don’t know.’”

As Schulman opened his talk, he asked each of the 25 attendees in turn to share what makes them happy. For some people, their happy place was in the garden pulling weeds. For several others, it was spending time with grandchildren. Some found happiness in volunteering and helping others, or by being active in their church. The crux of the exercise was two-fold: to find awareness of what makes you happy, and to begin looking for ways to fit that into your life. If your favorite thing to do is pull weeds but you don’t have a garden, one solution might be to pull weeds in a neighbor’s garden. If you want to spend more time with your grandchildren, make choices each day to help that become a reality, whether it’s saving money for a trip to visit them or setting time aside to be with them.

“What I’m going to talk about today is the internal choices that we make, the parts of us that we have control of,” he said. “And it doesn’t cost anything. It’s free. It’s about intention, it’s about appreciation, it’s about gratitude, it’s about love.”

Schulman, born and raised in the Bronx in New York, lived in the Bay Area for 30 years. He taught early reading and English in public schools for 14 years, then had to shift his life around after he seriously injured his back while breaking up a fight at the school. Traditional medicine and treatment didn’t help him, but he found something that did: acupuncture. Schulman became a massage therapist and incorporated into his practice acupressure using physical pressure points but no needles. Six years later, he sought a deeper understanding and 35 years ago became a licensed acupuncturist.

As a life coach for the past three years Schulman has worked with individual athletes or teams. He’s still doing that, but he’s also interested in working with older people, helping them through life transitions. “The coach can see things that the athlete can not see in themselves and the coach can make a suggestion to change their routine, change their game,” Schulman explains, “because they are not aware of it themselves. It’s amazing to see that light go on.”

His happiness work takes the same approach. “With coaching, I don’t have the answers. You have the answers, the client has the answers, it’s just a matter of bringing out the awareness around it,” he says. “With therapy you talk to a therapist and yes, it feels good to talk to somebody, but in that relationship there’s an assumption that the therapist knows the answers and will tell you what to do. But in coaching I don’t assume I have the answers. We work together as a team. It’s not my job to give you the answers because that won’t shift behavior. Awareness will shift the behavior.”

One of the points Schulman made was to think about the language we use to describe happiness. In the Constitution, it’s called “the pursuit of happiness.” But, Schulman asks, why must we “pursue” happiness? Why can’t we just “be” happy?

Schulman moved to Eugene 7 years ago. He first came to the Willamalane Senior Center for Medicaid counseling and discovered an active network of seniors and presentations taking place there. Earlier this year, he began planning this talk on finding happiness, his first presentation as a life coach ad his first time in front of a crowd since his school teaching days.

In the hour set aside for him, Schulman covered a lot of ground and kept the crowd interested and at ease. On the whiteboard, he wrote out the words he wanted to focus on: Intention. Appreciation. Gratitude. Love. Attitude.

“Intention is a promise you make to yourself,” he says. Actively making a choice to do things that make you happy or move you closer to doing what makes you happy is, by itself, going to make you feel happier.

Appreciation and gratitude are two sides of the same coin. Appreciation is being grateful for what you have, for where you are in your life, and appreciating the mere fact that you want to be a happier person and are trying to make that happen. Gratitude is a simple act that shows yourself and others that you appreciate everything you have and whatever you get, even if it is not all what you hoped for.

Attitude is everything, according to Schulman. He wrote on the board “attitude equals altitude,” meaning that the more positive your attitude about life is, the more happy you will feel. Along wit attitude comes the philosophy of not sweating the small stuff, meaning, don’t let the little stresses in life become your focus.

Before class started, Schulman asked an attendee, Diane, why she came to the talk on finding happiness. Diane said, “You’re unhappy and you’ll stay that way unless you do something about it.”

That comment encompassed all that Nathan Schulman had tried to convey to the audience that day: happiness takes awareness. It takes a little bit of effort. It may even take a lot of effort, but no one else can do it for you, and you already know just what you need better than anyone else.

For a list of TED talks about finding happiness and being happy:
http://www.ted.com/topics/happiness 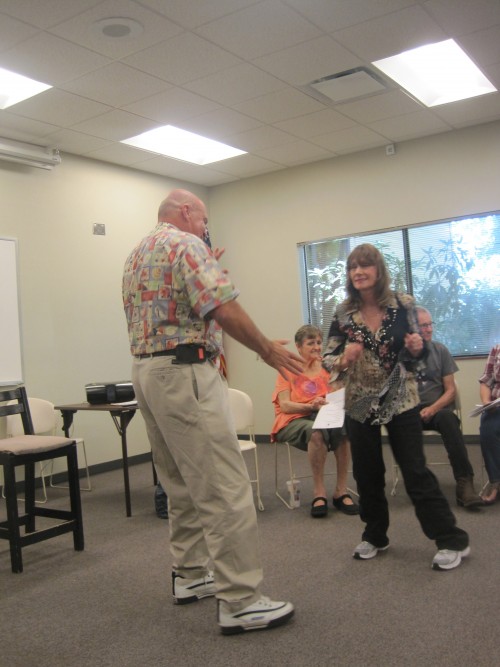 Life coach Nathan Schulman started off his talk by playing the pop song “Happy.” Paula Manzano, 63, boogied along with him. Behind them sits Manzano’s friend, Rose Volner, 69, who brought Manzano to the talk. Photo by Vanessa Salvia 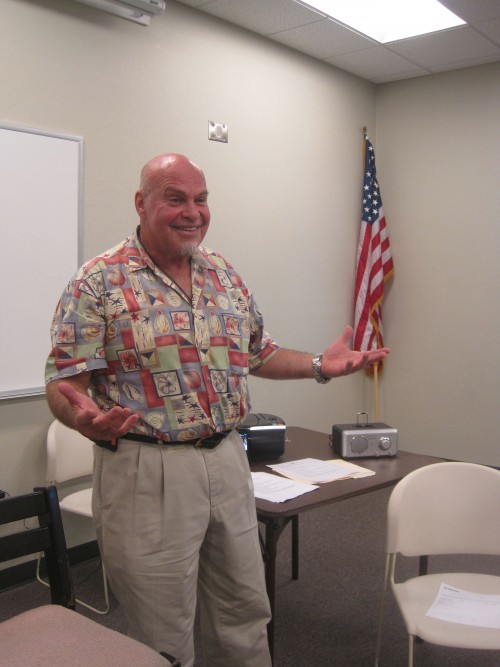 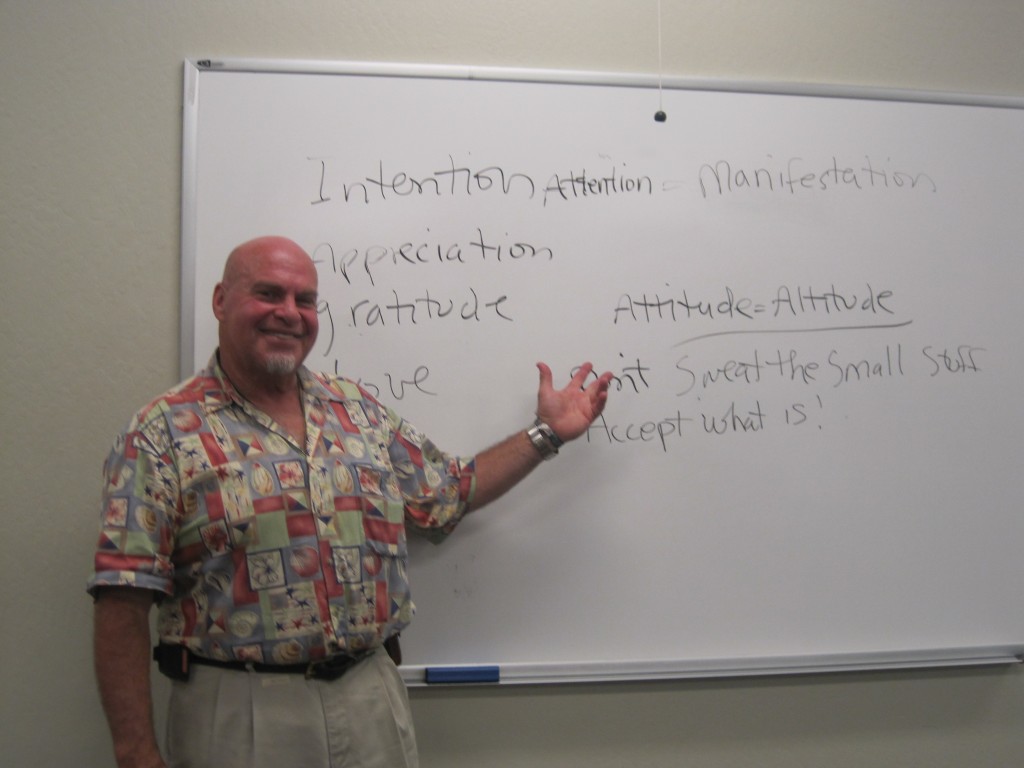 Life coach Nathan Schulman wrote on the white board some key concepts of his talk about happiness: “attitude equals altitude” and “don’t sweat the small stuff.” Photo by Vanessa Salvia