By Vanessa on March 5, 2015 in Boomer and Senior News, Health and Wellness, Retirement, Seniors 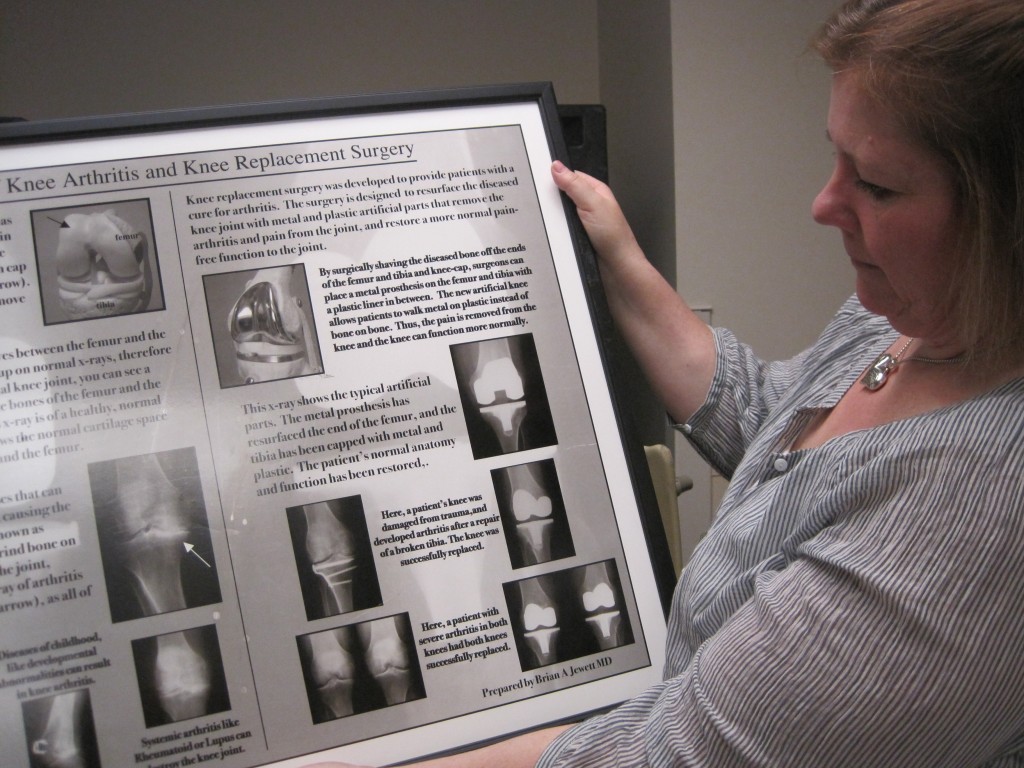 Joint replacement, along with organ transplants, is one of the greatest medical advancements we’ve made. Surgeons today can take a damaged or arthritic joint and replace it, decreasing pain and increasing function in the ankle, elbow, knee, hip or anywhere two bones are connected.

Denise Higuera, the coordinator of the Joint Replacement Center at PeaceHealth’s Sacred Heart Medical Center at RiverBend in Springfield, says that a wide range of people seek out joint replacement. “We have athletes, people who are running and playing tennis and all sorts of other things,” she says. “They’ve been on a high level of activity and now their joints are worn out. We have people who had an injury and are older and never did anything about it until they decide that they cant put it off anymore because they can’t walk on it. We have people who were in accidents. And of course there’s a range of people in between all of those scenarios.” One lady told Higuera that she really wanted to be able to get on the floor and play with her dogs.

The bone ends of a joint are covered with a smooth layer of cartilage. Normal cartilage allows nearly frictionless and pain-free movement, but when the cartilage is damaged or arthritic, joints become stiff and painful. When the pain is severe, the person may avoid using the joint, which, counterintuitively, weakens the muscles around the joint and makes moving it even more difficult.

During surgery, the joint is replaced by prosthetic materials that are designed to move just like a normal, undamaged joint. The prosthesis is generally composed of two parts: a metal piece that fits closely into a matching piece. A plastic bone cement may be used to anchor the prosthesis into the bone.

The Joint Replacement Center is a collaboration between PeaceHealth Sacred Heart Medical Center at RiverBend and Slocum Orthopedics in Eugene. More than 1,200 hip and knee replacement surgeries are performed here annually. Director Higuera says she recently reviewed numbers that showed 867 knee and hip replacements performed there in the past six months. Sacred Heart Medical Center at RiverBend was the only Oregon hospital on the list of Medicare’s 97 best hospitals for hip and knee replacements released in December of 2013.

To determine its rankings, the Medicare study looked at the number of times patients were readmitted to the hospital within 30 days of discharge and how often patients suffered serious complications after surgery. PeaceHealth Sacred Heart RiverBend ranked “above average” in low readmission rates. Overall, 95 percent of hospitals nationally were rated “average.”

The hospital began developing the Joint Replacement Center in 2009. The Back on Track Program was launched in 2012 to enhance wellness and recovery. The program has lowered infection rates, deep vein thrombosis occurrences (blood clots) and reduced patient length of stay. “What they used to do and what they’re doing now is pretty amazing,” says Higuera. Doctors use less narcotics so people can get up and move around faster. Today’s joints can support a person’s full body weight right after surgery, so the program gets people up and moving the day of surgery. “As long as you’re medically stable we’ll get you out of bed the same day,” explains Higuera. “That helps prevent blood clots, and joints themselves have a higher risk of blood clots, so the nurse is always checking on you to make sure you’re moving around and doing your therapy.” More than 80 percent of the patients at the center go home on the second post-operative day. “They used to stay 4, 5, 6 days for these operations,” says Higuera, who has been an orthopedic nurse for more than 10 years. “Now they’re leaving on post-op day 2. It’s very exciting.”

Today’s seniors are more active than ever and don’t want to slow down, especially because of joint pain. According to a report on the AARP blog, about 600,000 patients in the traditional Medicare program have their hips or knees replaced each year. In 2010, there were 719,000 knee replacements and 332,000 hip replacements according to the National Center for Health Statistics.

Knee replacement surgeries used to be considered primarily for very old patients with severe osteoarthritis. Now patients in their 40s and 50s are seeking out joint replacement. According to the AARP, the rate of older adults getting knee-replacement surgery has more than doubled in the past 20 years. The average age of the patients used to be in their mid-70s. According to the American Academy of Orthopaedic Surgeons (AAOS), the total number of knee replacements performed each year, both total and partial, rose 30 percent from 2004 to 2008. In that same period, there was a whopping 61 percent increase in these surgeries among men and women ages 45 to 64.

Patty Brooks Dove is 54. She traveled to PeaceHealth from her home in Oakland, Oregon, to have both of her hips replaced. “My hips have been giving me trouble since I was a teenager,” she says, “and when I was pregnant they got a little worse. Then I was a waitress my whole life so I was always on my feet and my hips always hurt.”

She was 46 when she first considered replacement surgery. She went to a doctor in Roseburg who she says brushed her off by telling her she was too young and not ready for the procedure. And was not too nice about it, as Dove recalls. “She told me I had to lose weight and get older,” Dove says. Then in March of 2011 she went to the Slocum Center in Eugene, where the orthopedic surgeons there told her there was no reason to continue the suffering if she was in pain, and they began to prepare her for the operation. At that time the pain was just in her right hip, so Dove wasn’t considering the need to have both hips worked on.

Her first hip was replaced in May 2011, and at a checkup 9 months later she asked them if they would take an X-ray of the other hip. “They said, ‘It’s worse than the other one had been,’ so we decided to go ahead and do that hip in April of 2012.” Dove says she has a lot of respect for PeaceHealth and the program. When she was there, they took notes on her thoughts on how they could adjust the program for people like herself who are younger than the average patients. “They are really trying to get the best for each patient regardless of the different situations they would be in,” Dove says.

Before surgery, patients are cleared by their primary care physician, the operating physician and an anesthesiologist. Then they attend Higuera’s hour-long educational class and they receive a comprehensive guidebook. The guidebook also comes with a DVD depicting an actual surgery. “Some people are not thrilled about watching that!” Higuera says. But even without watching the DVD, the class is helpful. “I’ve had people come to the class two or three times just because they’re nervous about surgery and it helps them to understand the process.”

Dove did not watch the video. “My doctor, Craig Muhler, told me not to; I’m kind of squeamish. But I learned more than I needed to know,” she recalls. “It really gave me an idea of what was going to happen, how it was going to feel and what I needed to do so that I wouldn’t feel that way anymore.”

Higuera says that 10 to 20 percent of the patients that she meets had such intense bone-on-bone pain before the surgery that the incisional pain and the surgery pain is so much less than what they were experiencing before that they don’t want to take any pain medication. “I had one woman say, ‘I don’t know why I waited so long,’” says Higuera. “It’s pretty neat to see these people getting up and moving around and doing well after surgery.” The center features a circular hallway which is marked in meters. Patients walk laps around the hallway and track their progress with magnets on a large board in the hallway. “The magnets are tracked by room number and are red for knees and blue for hips,” explains Higuera. “It gets pretty competitive sometimes!”

The center hosts luncheons every two months for people to share their surgery experiences. “People come and talk about their experiences and I get a lot of feedback at that point,” says Higuera. “I really enjoy it. I see these lives completely changed. They struggle to come to class. It’s a big deal. They struggle to get everywhere they need to go to have this surgery, but then it’s fun when they come back in for the luncheon and they’re walking without canes or wheelchairs or anything. I really enjoy that part of it.”

Patty Brooks Dove is one of the patients to echo the “I’m so glad I did it” sentiment. “If you’re hurting or in pain then go ahead and have it done,” she says. “It can really help.”

The website of the American Association of Orthopaedic Surgeons has information about general health and joint replacement.
www.aaos.org

According to the AAOS, here are some questions patients should ask their doctors when considering total joint replacement: 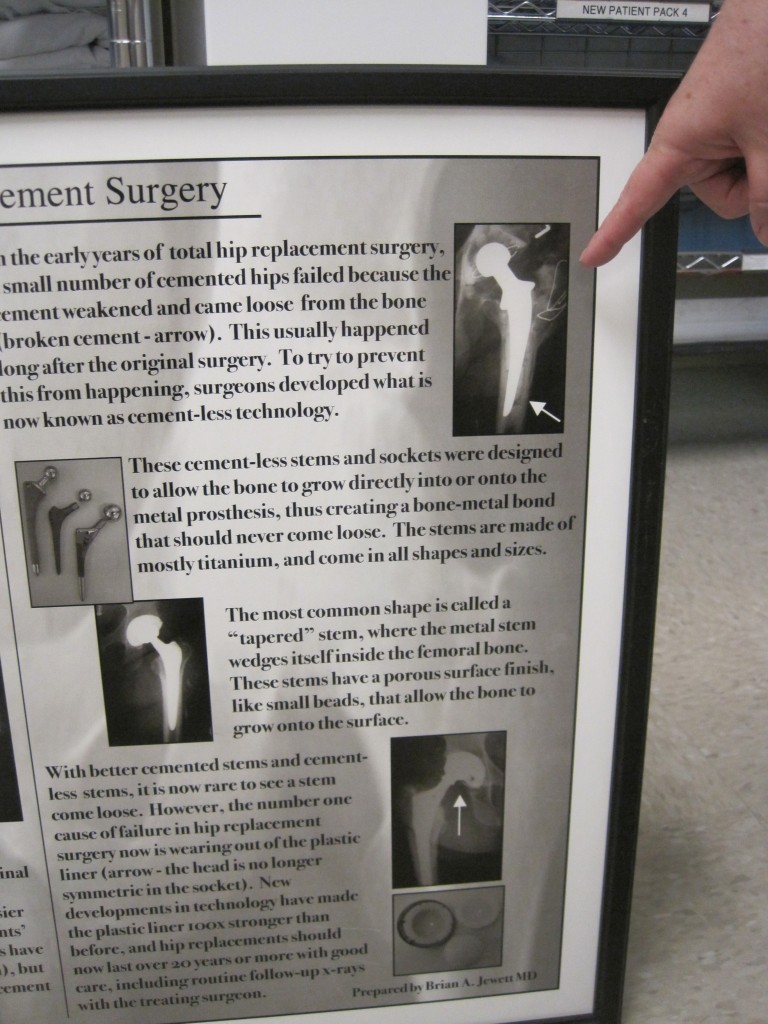 Joint Replacement Coordinator Denise Higuera points to an X-ray image of a pin holding a prosthetic joint in place. Photo by Vanessa Salvia