This article appeared in the February 2015 edition of Spot Magazine. It’s about a dog named Callie who’s owner worked as a hospice nurse. Callie showed a remarkable bond with the people in hospice who were near the end of their journeys. People loved her so much that a fund to provide for the pets of people in hospice care was started in her name.

For the Love of Callie

Beloved therapy dog lives on through fund she inspired 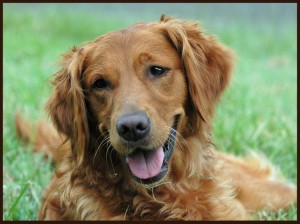 While people have become increasingly aware of the depth of the human/animal bond, now and then com

es a story that surprises.  Like Callie’s — a Golden Retriever whose imprint remains alive and well long after she has passed on.

Callie bonded to humans right away, and was so loving toward them that she earned the role of therapy dog, visiting patients in homes, assisted living facilities, and nursing homes in Albany, Oregon.

Callie’s owner Tracy Calhoun is a hospice nurse at Samaritan Evergreen House, a facility which cares for people nearing the end of their lives. “Callie was a frequent visitor to hospice patients and their families in their places of residence,” she says.

Sadly, Callie died of cancer in 2011 at age 6½, before the inpatient Hospice House was built. However, her life and work with patients lives on through a foundation she inspired, called “Callie’s Fund.”

“Many of Callie’s favorite families encouraged the establishment of a fund in her memory,” says Calhoun. “It has been used to help hospice patients’ pets in various ways — like assisting with veterinary fees, purchasing supplies and food, paying adoption fees to local no-kill shelters for families who could not care for the patient’s pet after the death, and assistance with adoption alternatives.”

Callie’s Fund also offers financial support for the needs such as boarding costs of other therapy dogs, as well as food and treats for visiting pets, and the care of Syd —an outdoor therapy cat who adopted the hospice staff about 18 months ago.

Prior to having Callie, Calhoun was involved with therapy dogs for many years, and helped develop a dog therapy program at another hospice facility in Washington State in the mid ’90s. She says there was much resistance to the idea at that time.

Thankfully, times have changed. While the work Callie did was with in-home patients, the hospice now has an inpatient facility with 12 beds, and an outpatient team serving 90 to 100 people in their homes.

When Callie was working, she would sometimes hold bedside vigils for dying patients, though Calhoun says they couldn’t always spend extended time with one person.

Nowadays, JJ — another Golden like Callie — is the primary therapy dog at Hospice House. “She has been with me since birth, and Callie was actually her nanny,” says Calhoun. “JJ works 12-hour shifts with me and has quite the Facebook following.”

Just like Callie, JJ does a lot for dying patients and their families. “She works off-leash here, so she often does rounds on her own,” says Calhoun. “I have had many families and staff tell me she visits rooms more often when someone is dying, and she will nudge a patient’s hand if they are making a noise.”

Calhoun has also observed the calming effect JJ has on agitated patients. “When patients are actively dying, JJ often wants to be right on the bed. They settle nicely when she is with them, waiting for medication to take effect. Her ability to be a comfort — silly distraction or quiet calm presence — has been very helpful, and she often gets thank-yous and gifts.”

JJ also assists at regional crisis events and volunteers as a HOPE Animal Assisted Crisis Response K-9. She went to Oso, Washington twice after last year’s landslide, and to the site of the shooting at Seattle Pacific University in June this year.

Calhoun and her co-workers at Hospice House are also actively building a therapy dog team that can visit patients regularly, since nurses there have long stretches off.

“JJ’s sister just had puppies, and I will be keeping one of the females who will be JJ’s understudy for therapy and hopefully crisis response work,” says Calhoun. “We also have a new young dog, Phoebe, who has been a certified therapy dog since she was 6 months old, and who often makes visits with her owner, our on-call nurse Jody Buktenica. Another dog, Marfa, owned by nurse Anne Arquette, visits patients in their homes.”

Calhoun says that the Samaritan Evergreen Hospice staff treats patients with animals very well. “They have frequently gone out of their way to assist and donate to our patients and families to provide for their pets, as well as re-homing animals whose owners have died,” she says. “Callie’s Fund is an extension of the generosity shown by those hospice workers.”

For more information  about how to support Callie’s Fund, contact the Albany General Hospital Foundation at 541-812-4663