By Vanessa on January 23, 2014 in Art and Artists, Business, Home, Register-Guard, Salvage and Design, Science and Technology

Just published today (January 23, 2014)! The Register-Guard Home and Garden section is filled with stories about the vendors and presenters at the Good Earth Home and Garden Show this weekend. One of my articles is in there, about Todd Albi and his highly efficient cooking stoves. How efficient? We’re talking an hour of hot flame from nothing more than the heat of 4 burning pencil-sized twigs. Albi was director of the cooking stove research at Aprovecho in Cottage Grove. They’ve long had a cooking stove research facility because so many people around the world cook on open fires. Their work was trying to make it more efficient Albi went off on his own and took some sophisticated technology from China which he is selling in his Eugene showroom.

Some of the models are expensive (a few hundred dollars) but the basic cooking stove is only $150. If I didn’t already have a wood stove, I would get one. In fact, I’m thinking of getting one anyway. The ability to cook using just a tuft of grass or twigs sounds really appealing when the electricity goes out, or the zombie apocalypse finally happens.

The other theme for this article was that the stoves can be purchased along with artistic welded bases by Eugene metal artist Ian Beyer. Beyer takes cast-off objects such as rake tines and farm implements and welds them together to form creatures and other cool stuff. Adds an artistic dimension to the cooking stoves for the person who wants to cook on a stove that looks like it’s perched on a dragon’s tail. 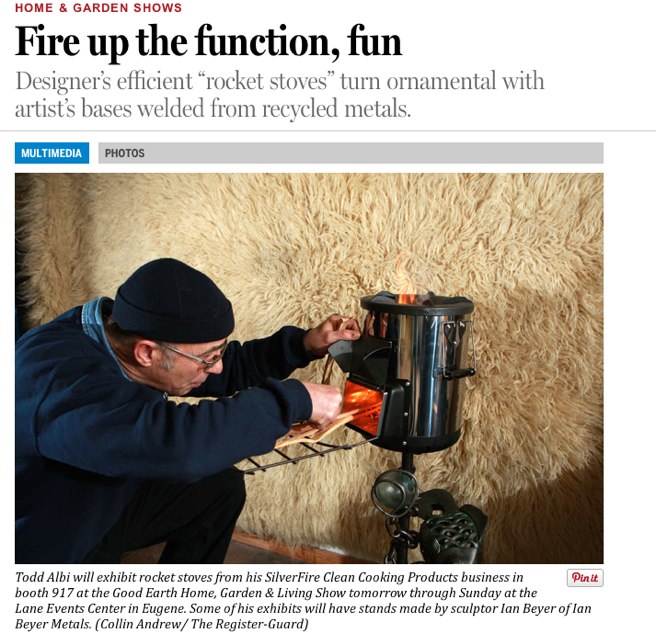 Functional and Fun
Highly efficient stoves are made even more appealing with artistically welded bases.

Small, compact cooking stoves are nothing new, but most of the designs don’t look great in a kitchen or garden. Todd Albi’s SilverFire cook stoves, with stands designed by local metal sculptor Ian Beyer, certainly do.

The line of SilverFire stoves that Albi sells at his Eugene showroom are based on designs for small, highly efficient cooking and heating devices called rocket stoves and TLUDs (top-lit updraft stoves). Albi was the founder and former managing director of StoveTec rocket stoves through Aprovecho Research Center in Cottage Grove. A rocket stove’s airflow is designed to make the most usable heat from the smallest amount of fuel. Because it is so efficient, a stove like this can boil water with nothing more than a handful of biomass—the heat of four pencil-sized twigs or a tuft of grass.

“The third world has always used biomass,” explains Albi. “Fifty percent of the world cooks on biomass, meaning anything organic that is flammable.” SilverFire’s clean, efficient devices are especially suited to places around the world where wood is scarce, or for people who live in rural areas where electricity is not available, or who want a reliable way to cook and provide heat in the event of an emergency. Some sophisticated models can be used indoor or outdoor, and can be hooked up to radiators to provide hours of heat. “The designs in semi-developed nations like China and India have really pushed the technology forward,” says Albi. “SilverFire is an amazing story of Chinese and United States cooperation in bringing together rocket stove and TLUD technology.” Albi has a humanitarian program that provides stoves to those in need around the world as well as stoves for disaster relief.

Of course, a highly efficient stove like this cooks a mean pot of paella or stirfry. For the homeowner who wants to avoid heating up their kitchen in the summertime, a SilverFire stove topped with Albi’s Dragon pot can bring a gallon of water to a boil in 13 minutes, with nothing more than a small handful of twigs for fuel. “You can fry, wok, boil or grill,” says Albi. “You can put any kind of cookware on any of these stoves.” Albi’s store demonstrates some unique cooking methods, such as two grill grates hooked together with lava rocks in between. He’s also planning to introduce a highly efficient wood-fired bread or pizza oven.

The stoves—rectangular or round stainless steel devices—are sleek and shiny by themselves, but when paired with a base or stand made by local metal artist Ian Beyer, they become unique art for home or garden. Albi found one of Beyer’s older pieces offered for sale on craigslist. Albi contacted Beyer and asked him to take that old piece and transform it into a stove base. Since then, they’ve worked together on a few stove stands.

“I use a lot of recycled found objects,” says Beyer. Items such as chains, industrial metal cast-offs and old farming implements become fodder for his welded creations. “The stove stand that looks like a bird utilizes a grass-cutting blade for the beak,” says Beyer. “The wings are part of a harrow, the belly is made of wrench heads, the eyes are transmission gears and the tail is pitchfork tines flipped upside down with some industrial punch-outs welded on them.”

In keeping with Albi’s dragon theme, one of Beyer’s stands resembles a dragon tail, made from rake tines and ball bearings for feet, and a tail made from spoons. Albi’s favorite stand utilizes river rocks, an antique cast iron lantern in the shape of a fish, and a glass float that Albi found while running on the beach. Another stand is made from river rocks and what looks like a giant drill bit, perhaps an augur.

“My art uses a little bit of everything from industrial metal to everyday kitchenware,” says Beyer. “When Todd asked me to do this I was excited. I like that the art is for something that is functional, like a stove, and I like what Todd’s doing with the technology.” 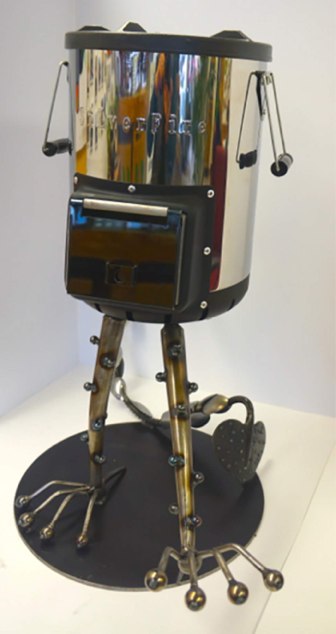 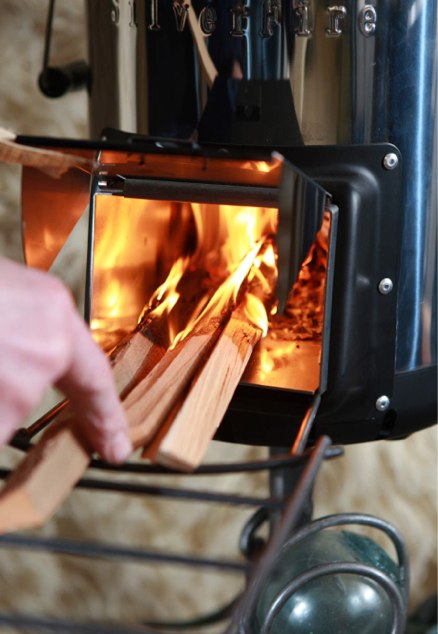